Huntsman coy about presidential run at black-tie affair in D.C.

WASHINGTON, D.C. -- On Jon Huntsman Jr.'s last official day as U.S. Ambassador to China, he attended a key gathering of top national newsmakers and opinion shapers in the Nation's Capitol.

The former Utah governor -- and possible presidential candidate -- marked his return to the states with an appearance at one of Washington, D.C.'s most prestigious events: the annual White House Correspondents Association dinner at the Hilton Hotel. 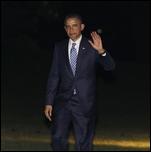 Obama to shift from consoler to comic Saturday

President Barack Obama is shifting from consoler to comic for his appearance before a mix of politicians, celebrities and journalists at Washington's premier black-tie dinner.

Huntsman and his wife, Mary Kaye, returned to the states from Beijing with their younger children Friday. On his way into the dinner, Huntsman gave few clues about his future plans.

"We're still a diplomat for the next five hours and beyond that they say you never should make decisions while jet lagged, so I think I'd better stick to that good, common-sense wisdom," he said.

But on a more serious note, he did go on to say, "We have a little thinking to do and a little planning -- some logistical work ahead. We look forward to that."

The Huntsmans say they'll probably split their time between D.C. and Utah and that they're glad to be home.

"It's kind of surreal right now, just being back, most importantly being back on American soil," said Mary Kaye Huntsman. "Feeling euphoric, being back in the country we love so much. So glad to be home."

We're still a diplomat for the next five hours and beyond that they say you never should make decisions while jet lagged, so I think I'd better stick to that good, common-sense wisdom.

The couple admitted to making a trip to their favorite burger place soon after their arrival.

At Saturday's event: plenty of Washington journalists, Hollywood stars and other recognizable faces like Colin Powell and Donald Trump. The highlight each year is some good-natured joking, and President Obama made sure to include Huntsman in his remarks.

"My buddy, our outstanding Ambassador Jon Huntsman, is with us," said Obama. "Now there's something you might not know about Jon. He didn't learn to speak Chinese to go there -- oh no -- he learned English to come here."

President Obama then also made a couple of cracks at Mitt Romney and Donald Trump -- who got a heavy dose of humor from SNL comedian Seth Meyers.

Meantime, we can expect the GOP political field to take a more definite shape over the next couple of months with a number of candidates, including Romney, expected to officially announce their presidential bids.