SALT LAKE CITY - Monday marked the 47th anniversary of the assassination of President John F. Kennedy, and a Utah man has revealed never-before-seen photos of JFK in Salt Lake City.

The pictures document when Kennedy visited Utah the first time in November of 1957 and again just two months before his death in 1963. 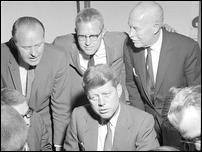 In 1960, Oscar McConkie was Kennedy's point person for his presidential campaign in Utah. He recently took time to reminisce about the campaign and about Pres. Kennedy's assassination 47 years ago today.

"The whole 'warmth' thing of John Kennedy certainly resonates in those photos," said Fox. "You can truly see his common touch with individuals. And you know, he's surrounded by people, or he's in an intimate situation, he just had a lot of life in his smile and in his way and of his character."

The trips were well-covered by the news media at the time. The Deseret News published a number of pictures, but unused leftovers were never printed.

Fox said, "The crowds would be all around him. And that's some of the nice things about the pictures is you find photos with him in the center of a crowd of 50 or 100. There are photos of him walking down from the church administration building to the Hotel Utah, just on the city streets. Those things don't occur anymore."