SALT LAKE CITY -- The 180th Semiannual General Conference of The Church of Jesus Christ of Latter-day Saints brought news of five new temples in the United States and two other countries.

During his opening remarks, President Thomas S. Monson talked of dedicating four temples since General Conference last April. Then he announced five new ones, some of which are in areas where Latter-day Saint temples are a first. 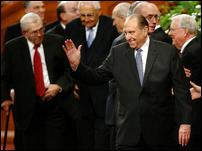 The announcement of five new temples and a call to increase the Mormon church's missionary force highlighted President Thomas S. Monson's opening remarks in this weekend's October general conference of The Church of Jesus Christ of Latter-day Saints.

"This morning, I am pleased to announce five additional temples for which sites are being acquired and which, in coming months and years, will be built in the following locations: Lisbon, Portugal; Indianapolis, Indiana; Urdaneta, Philippines; Hardford, Connecticut; and Tijuana, Mexico," President Monson said.

The new temples are a first in Portugal, Indiana and Connecticut. This will be the third in the Philippines and the 13th in Mexico.

With the Kiev Ukraine Temple dedication in August, the Church now has 134 operating temples, 7 under construction and 16 now announced.

"Tijuana is a very hard place to live, so when I heard there was going to be a temple there I was crying because I think that place really needs a temple," said Lydia Gomez, a Latter-day Saint from Mexico City.

Latter-day Saints were also counseled to protect their families and communities.

"Pornography, in particular, is a weapon of mass moral destruction. Its impact is at the forefront in eroding moral values," said Elder Quentin L. Cook, of the Quorum of the Twelve Apostles.

During the afternoon session, Church members voted to sustain their leaders; an apostle expressed gratitude in return.

"I have struggled to find an adequate way to tell you how loved of God you are and how grateful we on this stand are for you," said Elder Jeffrey R. Holland, also of the Quorum of the Twelve Apostles

The Church's priesthood session was held Saturday evening. Speaking to the men, President Monson warned them of their choices.

"Push a key on your computer which will take you to pornography ... you will have just stepped off the straight, safe path," he said. "Whether we are 12-year-old deacons or mature high priests, we are susceptible."

"I have watched sports fans vilify and demonize their rivals," he said. "Unfortunately, we see today too often the same kind of attitude and behavior spill over into the public discourse of politics, ethnicity and religion."

Many members came long distances to hear their church leaders speak, some for the first time.

"It was a great moment for me. The message inside was perfect, and I learned so much," said David Hamand, Latter-day Saint from the Ivory Coast.

General Conference sessions continue Sunday at 10 a.m. and 2 p.m. All four hours will be broadcast on KSL channel 5.