PROVO -- The BYU Athletic Department has formally announced its intention to go independent in football and join the West Coast Conference in all other sports.

In a press conference Wednesday, athletic director Tom Holmoe said the idea of going independent has been considered for years, but recent talks and subsequent deals with ESPN and the WCC made the move possible.

Being independent increases access to our national following of fans. Every home football game and men's basketball game will now be carried nationally.

The reason for the move, Holmoe said, is two-fold: access and exposure. The university wants all BYU fans have access to BYU sporting events and for the university's sports teams to have more national exposure.

"Being independent increases access to our national following of fans. Every home football game and men's basketball game will now be carried nationally," Holmoe said.

This has been made possible through an eight-year contract with ESPN to broadcast at least three home football games per season. In return, ESPN will be able to showcase BYU teams on programs such as Sports Center and College Game Day.

"Obviously, they play a great brand of wide open, exciting football that has given us so many signature moments, not only in the holiday bowls, [but] regular season. And we really look forward to televising those moments on a season-long basis. That's going to be great for us," said Dave Brown, vice president of ESPN programing.

National perspective on BYU's move to independence in football and the West Coast Conference in other sports varies, although the consensus of writers from coast to coast appears to be that the Cougars will gain more money and exposure.

Also, BYU TV will now have the ability to broadcast whichever live football games ESPN chooses not to and can rebroadcast the games ESPN does air that same day. [CLICK HERE for more details on the deal between BYU and ESPN]

Holmoe said with the help of ESPN, BYU will also be able to create exciting schedules in the coming years.

"Our vision is to play football games across the country against many of the storied football programs in their legendary stadiums, and to have those same highly-regarded programs return to Provo and play in LaVell Edwards Stadium," Holmoe said.

Already, BYU has scheduled upcoming football games with the University of Texas and Notre Dame. In fact, BYU and Notre Dame have scheduled a six-game series that will last through 2020.

Also Wednesday, the Western Athletic Conference announced a scheduling agreement with BYU for the 2011 and 2012 football seasons.

Five WAC teams - Hawai‘i, Idaho, Louisiana Tech, New Mexico State and San Jose State - will provide the Cougars with five games in the 2011 season and four games in the 2012 season. 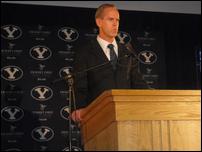 BYU's Holmoe: "This is the Pathway We Chose to Go For."

As ESPN VP of Programming Dave Brown put it, "it's a great day...to be back in business with BYU."

In 2011, BYU will host three of the five games against the WAC schools. In 2012, BYU will split the four games- hosting two. Specific opponents and dates have not been announced.

Utah State is not among the WAC opponents because of an existing three-game contract with BYU that goes through 2012.

Holmoe cautioned there will be a transition period of a couple of years and thanked the Western Athletic Conference for agreeing to play several games with BYU in order to work out scheduling problems.

Of course BYU couldn't run the independence route in football without finding a place for Dave Rose's national power BYU basketball program. Enter the the WCC, and now the Cougars have a new partner in basketball and other major sports.

WCC commissioner Jamie Zaninovich was also in attendance at Wednesday's press conference. He called it an historic day for his conference, as it is the first time in 30 years that the conference has changed membership.

"I think, put simply, BYU is a great fit for us because they align so well athletically and philosophically," Zaninovich said.

He then listed three reasons why BYU is a great fit for the WCC:

Zaninovich said the WCC will make changes to its scheduling to accommodate BYU's no Sunday-play policy.

He said at this time the conference has no plans to expand any further. [CLICK HERE to read more about BYU's affiliation with the WCC]