‘The Mailman' enters the Basketball Hall of Fame 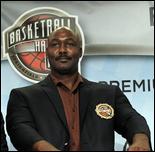 Karl Malone will go home with a spot in Hall of Fame. Unlike the other inductees, though, he'll go without his Hall of Fame jacket.

A couple of weeks ago, The Mailman said he planned on keeping his speech short -- that he did. He also said he didn't want to cry, but he ended up doing that too.

Malone struggled with his emotions throughout his speech, especially at the end when he recalled his mother, saying she had died seven years ago Friday.

Malone also thanked late Utah Jazz owner Larry Miller for believing in him. Malone is a two-time MVP and second on the league's career scoring list, and said his success came from staying true to his Louisiana roots.

"I hope I did it the way my peers did it before me," Malone said. "I didn't do anything but try to play hard."

Story compiled with contribuitons from Rod Zundel and The Associated Press.