SUMMIT COUNTY -- The Weber River rose up Monday night, threatening hundreds of homes near the community of Oakley. The water damaged dozens of properties, some of them seriously.

The sandbagging effort is still in high gear because this battle isn't over. One point of good news: The latest forecast indicates Tuesday night won't be as bad as Monday night.

Still, residents of Summit County are bracing for more trouble.

There's plenty of worry at "Sandbag Central" at Oakley Town Hall that the worst may not be over. In Oakley, they always knew they were at the mercy of nature, but overnight that lesson was driven home.

The Weber is normally a decent river this time of year, but Monday night it uncoiled like a giant snake and attacked its neighbors.

Hundreds of people pitched in on sandbag duty. They were trying to protect hundreds of summer homes and part-time residences in upper Weber Canyon as well as full-time homes for many in Kamas Valley. 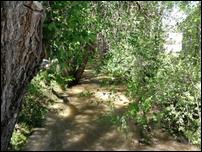 Flooding remains a threat in parts of northern Utah

Crews are preparing for more possible flooding from the Big and Little Cottonwood creeks in several areas of Salt Lake County.

Eventually, they found it to be a losing battle.

It's hard to say how many cabins and homes were damaged. Officials say at least two dozen homes were damaged and confirmed four homes in Oakley were declared unlivable, at least temporarily. We heard anecdotal reports of dozens more that were flooded. Some are seasonal homes with absentee owners.

In an Oakley home owned by Matt and Jenny Leavitt, the structural damage isn't obvious but officials say it was shifted off its foundation Monday night. There is extensive water damage inside.

"I was inside and heard the windows pop, and I saw the top of the house shift," Jenny said. "We got out and we were pulling things out."

The homeowner told KSL he believes it wasn't all Mother Nature's fault; he blames human tinkering as well.

But above the Leavitt home in Oakley, a contributing factor was a diversion into a canal owned by the Provo River Water Users. In the last few days, the water users have shut it down repeatedly to clean out debris, periodically boosting the flow of the river.

"If I find out they weren't doing what they were supposed to do, if there was some negligence on their part, I want some help," Leavitt said.

The Provo River Water Users told us they're trying to coordinate their debris cleanings so they won't add to flooding, but they say they're under no legal obligation to take any water out of the river -- and they point out the people getting damage made a choice to live in a flood plain.

"We're not out of the woods yet"

Many of the homes in the affected area near Oakley are not occupied this time of year, but area residents swung into action trying to protect them.

They lost the battle when a heavy rainstorm moved in.

"It got so dark you couldn't see," said Summer resident Robert Swenson. "And then the rain. It was really strong, and so we had to quit."

"The water was extremely high, well over the banks, flooding houses," said Ron Bridge with the Summit County Sheriff's Office. "This city was in a panic for quite some time this morning."

"We're standing in 2 feet of fast-rushing water trying to sandbag this thing," said Oakley Mayor Blake Frazier. "And we hit places where the sandbags just washed out and gone down the river."

The big worry is that the same thing will happen all over again, perhaps Tuesday night.

"We're not out of the woods yet," said Frazier. "We've got at least one more night of the same thing."

"It all depends on what Mother Nature does. We could have a storm come in at any time and we could have another serious problem on our hands quite quickly," Bridge said.

They're bracing for it in Oakley, not sure if they have done enough to handle it.

Spirits remain high, but they know it may not be enough if nature turns against them again.

Story compiled with contributions from John Hollenhorst and Marc Giauque.