SALT LAKE CITY -- If you're planning a Memorial Day outing in Utah's outdoors, it might pay to check out your final destination first. Some areas will remain closed due to mud, rain or even snow that in many years is gone by now.

In the Dixie National Forest, some roads will be temporarily closed along Highway 143, including the Duck Creek ATV trails, to avoid damage to the road that can be caused when vehicles travel on wet-muddy trails. Some higher elevation campgrounds are also still melting off from a heavy winter snowpack. 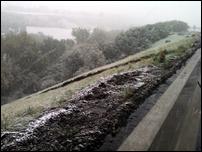 Another dose of wet spring weather caused a mudslide along Interstate 80 near 2300 East Monday morning.

To the north, the Utah Department of Transportation says it's likely the Mirror Lake Highway and Guardsman's Pass will remain closed. A spokesperson tells KSL crews have tried to clear the roads, but the snow keeps coming back. There is a possibility, though, that the Nebo Loop will be open by Friday. And, UDOT will reopen the Alpine Loop between Provo and American Fork canyons on Friday.

The storminess isn't changing everyone's plans, but it will keep Laura Delgato out of her favorite southern Utah playground.

"There's still snow," she said. Delgato plans, instead, to stay home and do chores. She sees good and bad in the weather. "There is green and no air conditioners yet," she said.

Anthony Hutchison, though, will keep his plans to travel to the Marysville area.

"It may be a little harder to keep the flowers sticking on the graves, that's about it," he said. Hutchison said the weather has ruined a lot of his spring golf outings.

"It's about June and it's still snowing. It's kind of weird," he said.