Close proximity? Dems and GOP together at Salt Palace Saturday

SALT LAKE CITY -- The finishing touches are being put on the Salt Palace Convention Center as both Republicans and Democrats prepare to share the facility during their party conventions Saturday. 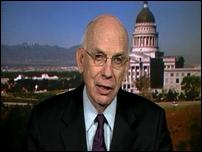 U.S. Sen. Bob Bennett has been on the defensive. Now, on the eve of the moment of truth, he says he feels good.

Organizers expect as many as 6,000 GOP delegates and guests, plus thousands more Democrats.

"It's a lot of folding chairs," Utah Republican Party vice-chair Kitty Dunn told KSL Newsradio Friday. "You can see it's kind of daunting, but we're excited. We're really excited that there's that much interest."

"It's the most I've ever seen," Utah Republican Party chair Dave Hansen said.

CNN and The Los Angeles Times are among the national outlets sending reporters.

Democrats say they're also seeing high public interest in some individual races, including the race for governor.

"It really is an exciting time for our state," Utah Democratic Party vice-chair Karen Hale said. "There will be lots of opportunities tomorrow for people really to learn about what each party has to offer."

Both Democrats and Republicans say they'll get along, despite being housed in the same building together.

"Look, we're all grown-ups. We're Utahns. We're polite," Dunn said. "I don't expect anything but the best demeanor from both parties and those attending those conventions."

If there is drama, it may be over the noise. Republicans say they plan to be loud.

"All of us are going to be loud. You can just expect it at a convention," Dunn said. "That's what happens."

Laughing, Hale said she has a plan if Democrats have to tell the GOP to pipe down.

"I'll just send somebody like Ben McAdams over to ask them," Hale said. "He has that mean streak."