MIAMI (AP) -- Dwyane Wade scored 29 points and the Miami Heat held the Utah Jazz to their lowest offensive output of the season, winning 80-70 on Wednesday night.

Udonis Haslem added 12 points and 11 rebounds for the Heat, who improved to 11-1 against Utah since the start of the 2004-05 season. Quentin Richardson scored 11 for Miami, which also had its lowest score of the year, one point shy of the 81 it managed in a win over New Jersey last month.

Deron Williams scored 18 points and Carlos Boozer scored 14 -- 12 of those in the opening minutes -- for the Jazz, who actually outshot Miami by a slim margin, 37.5 percent to 36. But the Jazz had 21 turnovers, which Miami turned into 28 points.

Jazz run on empty against Heat

Playing their fifth road game in eight days, the Jazz sputtered and stalled somewhere between Orlando and Miami resulting in a lackluster 80-70 loss to the Heat.

Utah's previous season-low in scoring was 77 against the Los Angeles Lakers on Dec. 9. The Jazz are 0-5 when scoring under 90 points this season, and have lost 54 of their last 55 games since February 1999 when scoring less than 80 points.

After one, Miami led 32-30. Not one quarter. One half. It was the lowest-scoring first half in the NBA this season, besting -- worsening? -- the 38-30 offensive slugfest between Portland and Charlotte on Nov. 14, according to STATS LLC.

Boozer scored Utah's first 12 points of the game and finished 5 of 7 in the half, which was the only thing making the Jazz statline remotely tolerable, considering his teammates combined to shoot 9 of 27 in the first 24 minutes.

Utah went 6 1/2 minutes without scoring during one stretch, missing nine straight shots with four turnovers as well. Miami outscored the Jazz only 6-0 during that time, shooting 3 of 11. The Heat took the two-point halftime lead with 6.6 seconds left on a 3-pointer by Quentin Richardson. 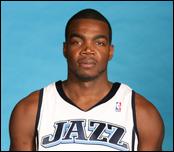 Paul Millsap has left the Utah Jazz's game at Miami after getting hurt trying to defend Heat center Joel Anthony.

Utah's last lead came after a layup by Williams with 9:37 left in the quarter, putting the Jazz up 35-34. The Heat seized command from there with a 23-5 run, Wade getting 10 of those points.

The reigning NBA scoring champion shot 6 of 12 in the third quarter, capping the period by splitting two defenders off the dribble and then elevating past Mehmet Okur and Andrei Kirilenko for a dunk that put the Heat up 63-49 going into the fourth.

NOTES: Professional poker star Phil Ivey was courtside. ... Utah fell to 5-9 on the road. ... Boozer's 12 points to open Utah's scoring was the most consecutively by a Heat opponent this season. ... Heat center Jermaine O'Neal left after three minutes with a strained groin and did not return. ... Jazz forward Paul Millsap left in the third quarter, needing 10 stitches in his mouth after fouling Heat center Joel Anthony. Millsap also was diagnosed with a mild concussion.