Dave Hansen said he's been trying to arrange some kind of party event since he learned Palin was coming to town. Late last week, Palin's people told him she wasn't doing that kind of thing. But Hansen said he's read of at least one such event in Minnesota. 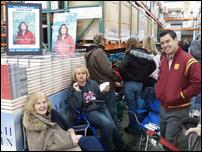 Frigid temperatures did not deter dozens of Utahns who are eager to meet Sarah Palin.

"Sometimes I wonder if they forget that it was the Republicans that made her into the position to where she could have a book signing," said Hansen.

Hansen doesn't know if the snub came from Palin herself, but he won't be at the book signing; and it's not because he doesn't have a Costco card.