SALT LAKE CITY (AP) -- Carlos Boozer scored a season-high 35 points and had 13 rebounds to lead the Utah Jazz to their fourth straight victory, 96-87 over the Indiana Pacers on Friday night.

The Jazz opened the game on a 22-3 run, then got sloppy and had to stop several runs by the pesky Pacers down the stretch. Boozer scored nine points in the fourth as the Jazz avoided blowing a huge lead to Indiana, which lost its fourth in a row.

Deron Williams finished with 13 assists and 11 points despite playing most of the game in foul trouble, and rookie Wesley Matthews added 18 points, setting a season high for the second straight game. 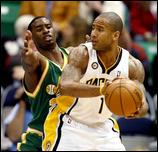 From free agent to starter, Matthews finding place on team

Right before the end of the first half, rookie Wesley Matthews drained a three pointer to push the Jazz lead back up to 13. Not only was the shot a huge momentum push for the Jazz, it may have solidified his spot on the Jazz roster.

Danny Granger led Indiana with 26 points, and Troy Murphy had 16 points and 10 rebounds.

Indiana never quite recovered after opening the game 4 for 16 from the floor and fell to 0-3 on a four-game trip, which ends Saturday at the Los Angeles Clippers. But Indiana did keep it close despite scoring just 14 points in the first quarter.

The Jazz hadn't played since Monday and were sluggish in between the quick start and the rally that put away the Pacers late in the fourth quarter.

Utah didn't score in the fourth quarter until Boozer's three-point play put the Jazz ahead 82-72 with 9:18 to go, but Granger and Brandon Rush answered for the Pacers with back-to-back 3-pointers. Rush's shot with 8:36 left in the game cut the margin to 82-78, the closest the game had been since early in the first quarter.

But that was as close as it would get. Boozer got inside again for a layup with 6:02 remaining to start a 6-2 run that gave Utah a big enough cushion to hold.

Paul Millsap added 11 points and 12 rebounds for the Jazz, who went 5-1 on a six-game homestand to increase their longest winning streak of the season. Friday's win could have easily been a blowout, but instead ended up being close enough at the end that Utah's starters were still on the floor with a long flight to Minnesota for a game Saturday still to go.

NOTES: The Jazz wore throwback green uniforms, the same design the team had when it moved from New Orleans to Utah 30 years ago. ... Matthews was coming off career bests for points with 17 on Monday in a win over Memphis. ... Boozer's previous season high was 28 points against Chicago on Thanksgiving. ... The Pacers have lost four straight to the Jazz. ... Utah shooting guard C.J. Miles made his season debut after missing two months with a torn thumb ligament. He went scoreless in 12:44.