Opening statement:
Looking at the San Jose State game, offensively we did a lot of good things. We moved the ball well. We did have a couple of turnovers in the first half and need to do a better job possessing the football. We did have three turnovers in week one and cut that down to two last week, so we are doing a better job. The red zone offense is a concern. We did not take advantage of some opportunities. But we are moving the ball well and doing good things. Terrance Cain had over 300 yards of total offense. We turned him loose a little more on Saturday night and that paid dividends. He did a nice job. 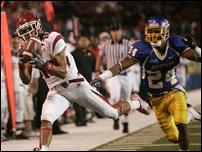 (16) Utah has work to do before facing Oregon

It wasn't pretty Saturday night in San Jose but No. 16 Utah extended the nation's longest winning streak to 16 games with a 24-14 victory over the Spartans. Now they travel north for another tough road game against Oregon.

Matt Asiata ran hard before he dinged his shoulder in the fourth quarter. Shak [Sausan Shakerin] and Eddie Wide did some good things for us. That was big for the running backs to come in and pick up the slack.

David Reed was 5-for-5 in catches, and Jereme Brooks had a good night. Jereme might have been our offensive MVP, he ran a slant route that was caught for a touchdown. On defense, we held them to 22 yards on 22 rushes. We had some obvious deficiencies in pass defense. We did not play the deep ball well and that was a glaring area of weakness on Saturday. The special teams did not kick the ball well. The return game was good. There were two difficult field goal attempts of over 50 yards, but we have to do a better job of kicking the ball like we did in week one.

For Oregon, we have to elevate our level of play to have a chance to win. We have our work cut out for us; they are a talented Pac-10 team and their stadium presents a hostile environment. They have great home field advantage. Their strength on the offense is the quarterback. He is a capable runner and loves to run the football. He is built like a running back. He is also a capable thrower but has not been as efficient the first two games. Their tailbacks are very quick. They are playing three of them by committee and they run very fast and very loose.

On injuries:
We had very few injuries after San Jose State. Matt Asiata is questionable for Saturday with a shoulder injury and Caleb Schlauderaff is questionable with a knee injury. Last week Latu Heimuli broke his foot and is out for the year. He will redshirt.

On the running game:
If Matt Asiata is not available, Shak and Eddie Wide will have to pick up load there. Cain will also with the quarterback run game, and we have the fly-sweep series with Reed and Brooks. Matt is our lead guy, but Shak and Eddie ran well. We have faith and confidence in those guys, but we have to get our receivers and Terrance involved, too.

If Matt is ready it will be a game time decision. We will know more as the week progresses. Same with Caleb.

On the kicking game:
We will have a competition this week between Ben Vroman and Joe Phillips. We may go to a two kicker system. Ben's leg is significantly stronger than Joe's.

On Jereme Brooks:
He is a very confident and competitive kid. We talked to him after the first game and told him we knew what his capabilities were and we were going to get him involved. He came through. He blocked very well, and as you know that's something that we emphasize.

On Terrance Cain:
I thought he played well. He only made one or two throws that weren't very good. We saw growth between game one and two in different areas. We turned him loose in the run game more often this week and capitalized. If he continues to make those jumps, he is going to end up being a very good quarterback.

On short yardage offense:
We are always looking to make it better. Matt has it built in that if Terrance is uncovered he can flip the ball out. Last week, Terrance was wide open and Matt put too much on it. There are times in short situations where we have tried to run and just haven't been physical enough.

The game will be televised live on ESPN. Radio is KALL 700 AM (kall700sports.com).

In the latest rankings, Utah moved up a place in the coaches' poll to No. 16 and fell one spot to No. 18 in the Associated Press rankings. The Utes were ranked No. 17 in both polls the previous week.

With last week's victory at San Jose State, Utah matched the second-longest road/neutral win streak in school history and now has nine straight wins away from home dating back to Dec. 20, 2007. The school record is 11 straight road/neutral wins, set from Sept. 27, 2003-Jan. 1, 2005.