Kobe Bryant scored 26 points, Pau Gasol added 22 and Lamar Odom had 19 off the bench in a 119-109 victory over the Utah Jazz on Tuesday night, giving Los Angeles a 2-0 lead in the best-of-7 first-round Western Conference playoff series. 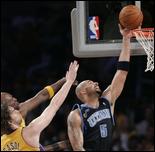 Did anyone really expect to see "nasty" tonight? Jeremiah Jensen examines the Jazz lackluster effort in Game 2 of the Jazz-Lakers playoff series.

The Lakers' Phil Jackson notched his 195th career postseason victory, the most of any coach in NBA history.

Deron Williams scored a career playoff-high 35 points and Carlos Boozer had 20 points and 10 rebounds for the Jazz, who head home for Game 3 on Thursday. They again played without injured center Mehmet Okur.

Utah lost its 11th in a row at Staples Center, including playoff games.

The Lakers' shooting sizzled in the opening quarter, but they found themselves in a tight battle throughout much of the second half.

They stretched their lead to 96-81 early in the fourth. The Jazz relied mostly on Williams, and he scored six in a row to get his team to 105-99 with 5:22 remaining.

Boozer scored five consecutive points to leave the Jazz trailing 109-106 with 3:18 to go. Odom's fastbreak layup kept the Lakers ahead 111-106, enough of a cushion to survive two missed free throws by Gasol.

Bryant hit a 21-footer from the left corner and Trevor Ariza followed with a 3-pointer as the Lakers ended the game shooting 60 percent from the floor.

Each time the Jazz threatened, though, the Lakers came up with a basket. In the final 2:27, Bryant scored six consecutive points and assisted on Shannon Brown's 3-pointer to send the Lakers into the fourth leading 89-78.

The Jazz cut their deficit to 49-43 midway through the second quarter on an 18-footer by C.J. Miles.

But the Lakers answered with a 17-3 run to take their largest lead, 66-44, just as Bryant returned after starting the period on the bench. Brown hit a 3-pointer after Luke Walton scored off an offensive rebound of Brown's previous missed trey, and Bryant scored five in a row before Ariza capped the run with a 3-pointer.

Even the bounces went the Lakers' way. Odom's 3-pointer spun around in the cylinder before dropping in, and a free throw by Bryant hit the top of the backboard and dropped straight in.

The Lakers weren't successful in stopping Williams' dribble penetration, allowing him to run off seven unanswered points that left the Jazz trailing 66-55 at halftime. Los Angeles shot 63 percent in the half, and the Jazz hit a respectable 60 percent.

The Lakers shot a sizzling 86 percent in the opening quarter and took a 41-29 lead. As he did in Game 1, Bryant got his teammates involved first while he settled for a lone 3-pointer. He had seven of the Lakers' 14 assists in the first half. Andrew Bynum scored 10 points in the game's first eight minutes, giving him a career playoff high.