There was a Memo sighting Monday morning at Jazz practice in Playa Vista, but Jerry Sloan wouldn't look. "He's not here," is what the Jazz coach told me. "We've got to prepare as if he's not going to play."

With his strained hamstring tightly wrapped Memo was a bit more upbeat than in recent days.

"I'm going to try to do a few things today, maybe shoot a little but I'm only about 65 or 70 percent and I have no idea if I'll be able to play tomorrow night," he told reporters. 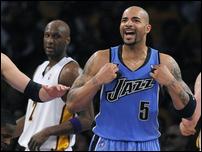 The Lakers won the West in a runaway and they stuck to a similar script in their playoff opener.

His teammates miss Memo, but understand.

"He wants to play," is how Andrei Kirilenko expressed it, "but if he pushes it too far he could do more damage so he's got to ease back."

Carlos Boozer's been there with a troublesome hamstring injury that forced him to miss part of the season a few years ago.

"They're tough to deal with," Boozer says, speaking from experience. "You want to play but your leg's not willing. He'll know when it feels well enough to play."

Deron Williams knows all about returning too soon from an injury. He did it back in November with his sprained ankle.

"He's got to be careful, but we definitely miss him," says Williams. "He's so important to everything we do offensively and defensively too."

Watching Memo for the few minutes the media's allowed to shoot video and ask questions before practice begins it was clear Okur was limping and limited.

I would be surprised if he played until maybe Game 3 in Salt Lake City.

Now for the nasty part: After Sunday's game 1 loss Coach Sloan said this team isn't as nasty as his old Stockton/Malone teams that made back-to-back trips to the NBA finals. He says they'll need some of that if they want to slow the Lakers down.

Today Sloan reiterated that need and said the 2007 run to the Western Conference Finals was helped a lot by the toughness of Derek Fisher, now the Lakers starting point guard, and Matt Harpring, slowed by injuries these days.

"They not only talked about toughness, they played that way so teammates could see it in action," Sloan remembered.

Willams said enough of the tough talk, "Of course we need to be more physical with them but talk is cheap, we've got to do it."

Boozer and Memo echoed Sloan's hope that they'll play nasty, but Kirilenko, as always, had the thinking man's approach.

"No, it's not so much nasty, we need to start the game with greater concentration on defense," Kirilenko says. "It's more a matter of concentrating harder throughout the game."

We should expect better effort and execution from the Jazz early in Game 2, but the Lakers will adjust too. Remember in the opener the Jazz shot 35 free throws and outrebounded L.A. (20-7 on the offensive end), yet still struggled to hang in the game with the Lakers.

Speaking of nasty, heading home down two games to none against this experienced, talented Lakers team would put the Jazz in a very tight spot.

Maybe Memo can get a quick hamstring transplant.