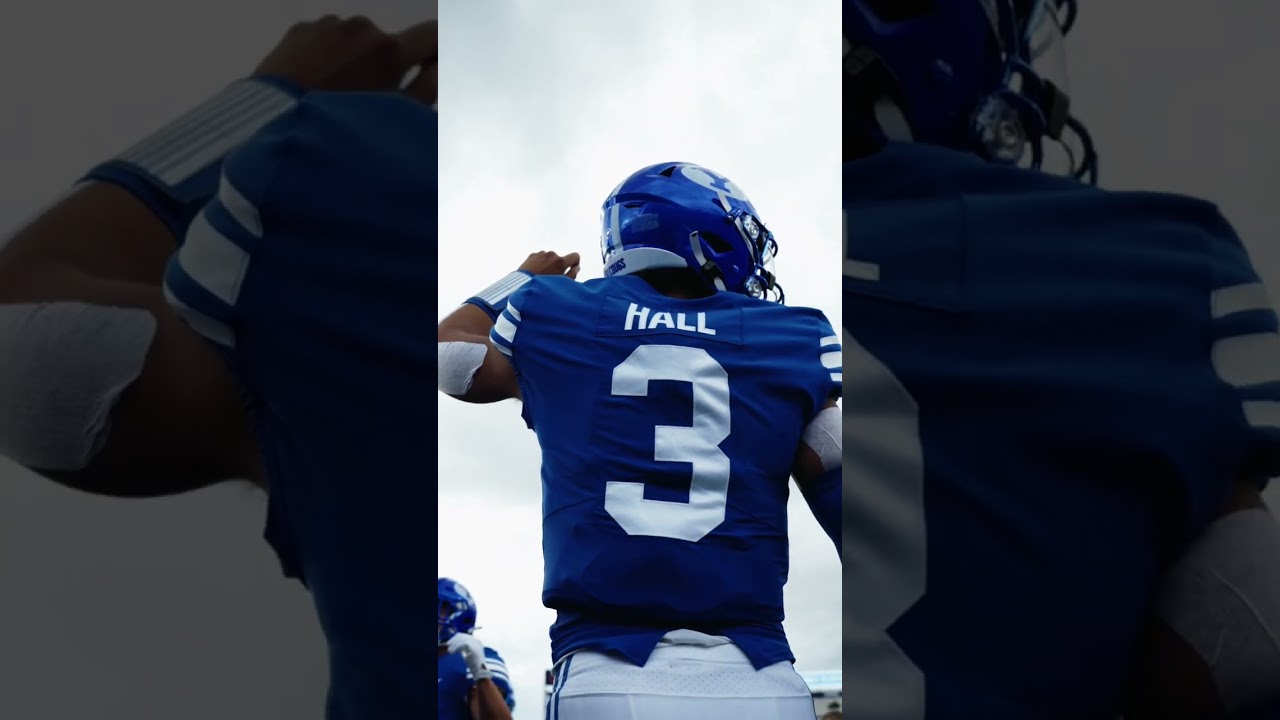 Be great, Jaren. Once a Cougar, Always a Cougar. 💙

PROVO — Jaren Hall's time at BYU has come to a close.

The fifth-year junior quarterback from Spanish Fork announced Friday evening that he is declaring for the NFL draft, making the announcement on social media.

Hall exits his time at BYU after a historic career, if not one of the more accomplished. The first-ever Black starting quarterback in BYU history, the 6-foot-1, 205-pound son of former BYU running back Kalin and BYU gymnast Hollie departs after throwing for 6,174 yards and 52 touchdowns with just 11 interceptions in three seasons — including two as the Cougars' full-time starter.

"This has been an amazing ride," Hall wrote on Instagram. "Words can't explain the joy I had playing in LES for my hometown. Thank you for everything. I've grown in ways that I can't describe. I can't tell you enough how much my family and I have appreciate the support.

"Thanks to my brothers and coaches. I have been blessed to grow from many life altering experiences on the gridiron."

The dual-threat signal caller also ran for 798 yards and nine touchdowns. Hall also caught a receiving touchdown during the 2022 season, a 22-yard score from wide receiver Chase Roberts against Baylor that helped the Cougars to a 26-20 double-overtime win over the then-No. 9 Bears. That was the first receiving touchdown by a BYU quarterback since Steve Young's game-winning reception against Missouri in the 1983 Holiday Bowl.

BYU's win over Baylor was just the sixth win over an AP top 10 opponent in program history.

But Hall is more than a great quarterback. The husband to former Utah Valley soccer standout Breanna McCarter and father to baby Jayda since 2021 and a returned missionary for The Church of Jesus Christ of Latter-day Saints, Hall was a standout basketball and baseball player at Maple Mountain and even played parts of two seasons with the BYU baseball team before retiring from the game due to injuries and football responsibilities.

But his passion was always in football, and so was his future as he rose to become a team captain and leader on a team that needed it following the departure of first-round draft pick Zach Wilson and others to the NFL following the 2020 season. His leadership was shown on numerous occasions, but perhaps most notably in the embrace he offered downtrodden kicker Jake Oldroyd with consolation as the Cougars beat Baylor.

"I'm really excited for Jaren. I think he's done some great things at BYU, showing how good of a player he is," said former BYU quarterback John Beck, who worked with Hall through his 3DQB training, with ESPN radio in Utah County. "But the thing I am most excited about is when the teams can talk with Jaren in the interview process and figure out who the young man is, as a person, as a worker, as a player.

"I expect to see some teams get excited about the prospect of getting Jaren on their team. Those that are looking for quarterbacks, a lot of teams will like Jaren for what he can bring."

Hall lifted the Cougars as high as No. 12 in the Associated Press Top 25, then helped rally the program after a four-game losing streak and winless October to clinch a bowl game and a 7-5 season prior to a 24-23 win over SMU in the New Mexico Bowl.

On Thursday morning, Hall formally committed to the Reese's Senior Bowl, one of the preeminent college football all-star games that prepares seniors for the draft. The No. 6-rated quarterback on Mel Kiper's Big Board on ESPN.com, Hall is roughly in the range as Tennessee's Hendon Hooker, Fresno State's Jake Heaner, and Stanford's Tanner McKee — all considered top-10 quarterbacks in this year's draft, though trailing Kentucky's Will Levis, Alabama's Bryce Young and Ohio State's C.J. Stroud.

Hall leaves behind a quarterback room that includes redshirt freshman Sol-Jay Maiava-Peters, the dual-threat quarterback who started the Cougars' bowl game and ran for 96 yards and a touchdown and threw for 47 more in a 24-23 win over SMU. Fellow backups include Cade Fennegan, a Boise State transfer, and Nick Billoups, a former walk-on at Utah.

The Cougars also signed former Springville High star Ryder Burton in Wednesday's 2023 early signing class, and have received a commitment from former Corner Canyon standout and Yale transfer Cole Hagen, who recently returned from a two-year mission for The Church of Jesus Christ of Latter-day Saints.