PROVO — A Salt Lake City teen is being hailed a hero after saving a woman from drowning in the Provo River on Saturday.

Nathan Johnsen, 17, was with his church youth group when one of his youth leaders spotted something in the water.

"I saw something in the water coming rapidly towards us, and I couldn't tell until it got a little closer that it was a person," recounted Mary Anne Douglas, a youth leader and local nurse.

Douglas saw the young woman being dragged down by a deflated inner tube and an ill-fitting life vest.

"I was worried for a minute that this person was already dead," Douglas said. "That's what it looked to me, for a split second, was this was a person who was dying."

Johnsen's boat had just launched when Douglas shouted out. Johnsen jumped in without hesitation, and within a couple of strokes, he was next to the woman.

"She could not breathe at all when I got to her. For about 30 seconds, she was beneath the water, and I could not get her above water," Johnsen said.

The swift current and rocky riverbed made it nearly impossible to get her up.

"I genuinely for a good, solid 30 seconds did not think I would be able to rescue her," Johnsen said.

Finally, the two got to a section of the river where Johnsen could stand. With help from others, he got the woman out of the water.

Something that, moments before, he didn't think would be possible.

"I literally thought she could die in front of me and it could partly be my fault, so that's what really got me to think that I need to save this lady. So it was just a miracle," Johnsen said.

"Another minute or two, this may have been a different ending," Douglas said. "The timing of him getting over there and getting that chin out of the water was probably in the last minute to minute of a half of that window to save her."

Rescue crews say this is a reminder to never go alone on the river and to always have a life jacket that fits properly. 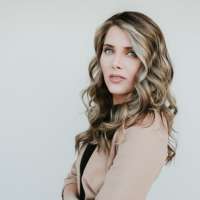 Kiersten Nuñez
Kiersten Nuñez is a reporter for KSL-TV. Prior to joining the KSL team in 2022, she spent several years working as a multimedia journalist in the Salt Lake City area.