Review: Is 'Minions: The Rise of Gru' worth a family trip to the theater?

THE SECRET LAIR — It feels like summer 2022 is a big comeback for the movies. With massive hits like "Top Gun: Maverick" and "Doctor Strange in the Multiverse of Madness," and sleepers like "The Black Phone" and "The Lost City," it has been a fun summer for movies.

But what about family movies?

It seems most of the family films this year have gone straight to streaming like "Hotel Transylvania 4" and "Chip and Dale Rescue Rangers." Sure, taking the family to the movies is expensive but it makes memories, and seeing your little ones' eyes light up in the dark theater is often worth the price.

If you love seeing movies the old-fashioned way with your family, then I have some good news for you: "Minions: The Rise of Gru" is now in theaters. Is it a great movie? No, but it's fun and your kids will have a good time.

Here are a few reasons I think "Minions: The Rise of Gru" is worth a family night out to the movies.

Steve Carell is back

We all know that the first "Minions" movie was a prequel to the "Despicable Me" franchise. I struggled with that movie as I thought a little bit of minion goes a very long way. The movie had its moments, but it felt unbalanced and boring at times.

A big part of that had to do with the fact that the movie was all minions all the time and it wore thin on me. This time around a young Gru, voiced by Steve Carell, is leading the little yellow henchman, which gives us something different. Carell has been the best part of these movies and having him back is a breath of fresh air.

Sure the little-kid Gru voice was a little tough to get used to, but once I did I was all in on having the character back and seeing his first foray into evil.

It has laugh-out-loud moments

"The Rise of Gru" isn't the funniest movie I've seen in a while, but I did laugh. I was more or less chuckling for the entire movie and outright laughing at several moments.

The comedy is more of what we've seen, but it's played well here with some great characters. The incredibly talented Alan Arkin joins the voice cast this go around, and he was likely my favorite part.

He and Carell bouncing off one another was a joy and made for some hilarious moments. As always, the minions give us some potty jokes we shouldn't be laughing at but can't stop ourselves.

I don't think "The Rise of Gru" is the funniest movie in this larger franchise, but it's much better than the first "Minions" movie.

Not a lot of depth, and that's OK

Some of my favorite animated films include "Soul" and "Coco." They are brilliantly written and beautifully animated. These movies are funny but also have a layer of creativity and depth that leaves me in awe.

"The Rise of Gru" is not one of these movies, and I was more than OK with that.

This movie aimed to put a smile on your face and get your kids rolling in the aisles. They don't totally give up on story, but they aren't trying to squeeze a tear out of you — well, I guess a tear from laughing.

I love those movies I mentioned earlier, but sometimes I need a fun family movie that's not trying to be anything other than a short diversion to keep you happy and smiling.

Should I go see it?

"Minions: The Rise of Gru" is far from perfect, and there were a couple of moments that seemed to drag, but for the most part it was a fun escape for my daughter and me.

I was able to bring my 6-year-old with me, and she had a ball. She was giggling and smiling, which made me do the same. This is not a great movie, but it is a fun one and that's why it could be worth a family night out.

Editor's note: "Minions: The Rise of Gru" is officially rated PG for some action/violence and rude humor. 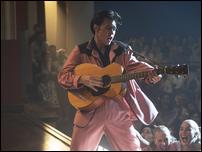 Review: Does 'Elvis' movie do the King of Rock 'n' Roll justice?

Here are some reasons "Elvis" strikes the right chord and why it is also out of tune.
×