How fact checkers and Sen. Mike Lee differ on new film about 2020 election

WASHINGTON — Though he acknowledges Joe Biden is the president of the United States, Sen. Mike Lee says a new documentary made by allies of Donald Trump raises "significant" questions about what took place in the 2020 election.

The film "2000 Mules" makes the latest case the election was stolen, but the group behind it has been assailed even by some on the hard right, The New York Times reported. The documentary, according to the Times, is based on arguments that fall apart under scrutiny.

"I did see the movie '2000 Mules,' and that movie does raise significant questions about what might have happened in that election. I think those are questions that need to be answered, and I would love to get the president's response to it and an explanation for why certain things happened," Lee, R-Utah, said in response to a caller's question Thursday on C-SPAN's "Washington Journal."

The basic assumption of the documentary, directed by conservative commentator Dinesh D'Souza, is that an army of left-wing operatives stuffed drop boxes with absentee ballots — a new spin on an old allegation that voter-fraud activists call "ballot trafficking," according to the Times.

It is based in part on an erroneous premise: that getting paid to deliver other people's ballots is illegal not just in states like Pennsylvania and Georgia where True the Vote centered its research and where third-party delivery of ballots is not allowed in most cases, but in every state, the Times' story said. True the Vote is a Texas-based nonprofit that describes itself as protecting election integrity.

The film also claims, but never shows in its footage, that individual "mules" stuffed drop box after drop box. Those claims are purportedly backed up by tracking cellphone data, but the film's methods of analysis have been pilloried in numerous fact-checks, the Times reported.

The Reuters Fact Check Team concluded "2000 Mules" does not provide any concrete, verifiable evidence of widespread voter fraud in the 2020 election.

"It's important to point out there's a difference between the possibility that some cheating may have occurred and whether or not he's the legitimate president," Lee said on C-SPAN. "The president of the United States is chosen by the Electoral College. The opening and the counting of the Electoral College votes resulted in a clear victory for Joe Biden. But that doesn't mean that things didn't happen along the way."

The opening and the counting of the Electoral College votes resulted in a clear victory for Joe Biden. But that doesn't mean that things didn't happen along the way.

Lee exchanged dozens of text messages with former White House chief of staff Mark Meadows over possible paths to keep Trump in office after the 2020 election. Lee told the Deseret News in April that the texts don't signal advocacy for overturning the results in favor of the former president and that he wasn't doing the Trump administration's bidding in exploring those ideas.

The senator voted to certify the 2020 presidential election.

"President Biden is the President of the United States. He was elected. I was there when the electoral votes were opened and counted," he said.

Trump, who endorsed Lee for reelection, continues to falsely claim the election was rigged and stolen.

In addition to the 2020 election, Lee talked about how Congress might deal with legislation prompted by the recent shootings, threats to Supreme Court justices outside their homes and his new book about the high court titled, "Saving Nine" during his appearance on C-SPAN.

Lee says social media platforms should report posts about potential mass shootings, and if they don't, the government will have to force them to do so.

Younger men, especially, sometimes signal on social media what they want to do by expressing admiration for killers or a desire to engage in a mass killing, he said. Often, he said, they crave attention or notoriety in knowing they might die or intend to die in the event.

"Social media companies ought to be reporting that and they should do it voluntarily, and if they won't, we will make them," Lee said Thursday on C-SPAN's "Washington Journal." 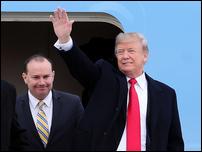 Mike Lee breaks silence about White House texts: 'I was not there to do his bidding'

Sen. Mike Lee says the text messages he sent to then-White House chief of staff Mark Meadows after the 2020 election don't signal advocacy for overturning the results in favor of Donald Trump.

The two-term senator, who faces two Republican challengers in a primary election this month, said many laws are broken every time there is a mass shooting in the United States.

"It is an unwise thing and potentially fraught with peril if when dozens of laws have been violated we rapidly conclude that what is needed or what will stop it the next time around is yet another law," he said. "You don't want to punish the law-abiding for crimes of those who are bent on lawless behavior."

On Wednesday, authorities arrested 26-year-old Nicholas John Roske near the Maryland home of Supreme Court Justice Brett Kavanaugh. Roske carried a gun, ammunition, pepper spray, a knife, a crowbar, zip ties and other tools that could help him break into a house, police said. Kavanaugh and his family were home at the time of the arrest.

Roske planned to kill Kavanaugh because he was upset about the leaked Supreme Court document abortion and the school shooting in Uvalde, Texas, according to authorities.

"It's fortunate that they caught him. It's tragic that he was there," Lee said.

Lee said there are "real problems" with showing up at the home of a Supreme Court justice to protest or influence the anticipated outcome of a case. Federal law, he said, prohibits protesting outside a justice's house.

"Showing up to protest at the home of a Supreme Court justice is itself a criminal offense," he said. "Doing so with a weapon and equipment to break into his home to carry out an execution is just unthinkably bad."

Lee said he hopes and expects Republicans, Democrats and Biden would condemn those actions.