Elon Musk on housing market bubble: 'They dug their own graves'

A “for sale” sign is displayed outside of a house in the Sugar House neighborhood of Salt Lake City on Dec. 7, 2021. (Shafkat Anowar, Deseret News)

Musk weighs in on housing: Musk's commentary stemmed from a tweet by Dogecoin co-founder Billy Markus (who uses the Twitter name Shibetoshi Nakamoto) saying cryptocurrency was "created as a statement against central bank control" after the Great Recession that followed fallout from the 2008 housing bubble burst, which was fueled by a subprime mortgage crisis.

Replying to Markus, Musk said the "axiomatic error" was a widespread assumption that "housing prices only go up."

"I don't support predatory lending, but many of those lenders were severely wounded or didn't survive," Musk tweeted. "They dug their own graves — a lesson we should all take to heart, including me."

cryptocurrency was created as a statement against central bank control, right after the 2006 recession caused by predatory lending practices and other irresponsible nonsense, leading to the housing bubble bursting, rampant printing of money, bailouts, etc. pic.twitter.com/qps0FLRVfG

The big picture: The housing bubble that preceded the 2007 and 2008 market crash was fueled by a subprime mortgage crisis depicted in films such as "The Big Short" and "Margin Call."

At the time, the U.S. overbuilt housing while risky lending practices fueled an unsustainable rise in housing prices. Eventually, mortgage delinquencies, foreclosures and devaluation of housing-related securities caught up to big banks, and the market collapsed.

What's happening now? Today, the U.S. housing market continues to see home prices skyrocket, surpassing 2006 levels. Those home prices accelerated dramatically over two years ago, when the COVID-19 pandemic sent the market into upheaval as many Americans reevaluated their lives.

Researchers and Economists at the Federal Reserve Bank of Dallas have warned they are seeing early signs of a housing bubble brewing — but they also say it's not the same as the 2006 housing bubble that preceded the Great Recession.

"However, there is growing concern that U.S. house prices are again becoming unhinged from fundamentals," Federal Reserve Bank of Dallas researchers wrote in a blog post in March.

A big culprit is what they called "exuberance." That drives "expectations-driven, explosive" price increases, and that can have consequences, including "misallocation of economic resources, distorted investment patterns, individual bankruptcies and broad macroeconomic effects on growth and employment." 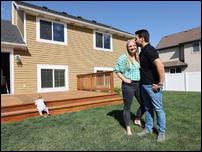 Ten times, Matthew and Bethany Clewett found a house they could envision themselves making their home, where they would raise their now almost 1-year-old daughter, Nellie. Ten houses they liked enough to put in an offer.

House prices can "diverge from market fundamentals," researchers wrote, "when there is widespread belief that today's robust price increases will continue." If most buyers believe prices will continue to go up, "purchases arising from 'a fear of missing out' can drive up prices and heighten expectations" of continued price hikes.

Does the West have a housing bubble? Local housing experts say it's hard to fathom a housing bubble popping in high-growth states like Utah, which was already grappling with a housing shortage before the onset of COVID-19.

Dejan Eskic, senior research fellow at the University of Utah's Kem C. Gardner Policy Institute who specializes in housing research, told the Deseret News in March that the typical understanding of a housing "bubble" — or what Americans saw in 2007 and 2008 — is not the same as what's happening in today's market, where there continues to be a real demand in housing, especially in Western states like Utah.

Lack of inventory is driving demand, he said, while back in 2006 irresponsible lending practices were enabling "everybody and their dog" to buy homes. Today, it's not easy to get a mortgage as lending requirements tightened up.

"So our market is driven by real people wanting housing," Eskic said.