Have You Seen This? Collar camera gives us a sneak peek into the secret life of a cat

Gonzo's owner put a camera on his collar to show the world what it's like to be a cat. (The Dodo, YouTube)

THE ALLEY — Growing up, my family had a cat. His name was Otis and he was a jerk. I have permanent scars from that cat and he was even de-clawed. So, yeah.

Otis was the epitome of cat. He didn't care about anyone and did whatever he wanted. I once watched him fight a Doberman and win. He use to literally corner me in the hallway and psychologically torture me just ready to pounce, but not doing it until I moved.

It took my family a while to realize that Otis wasn't our cat, but rather we were the chumps that kept giving him free food and a giant house to call his own. Otis would vanish for days sometimes. No idea what he did, and honestly I don't think I want to know. He was kind of a sociopath.

Once he was gone for a while and when he turned up, he was coved in ash and dust. We couldn't figure it out. Then, finally, when we put two and two together, we found out a house nearby had burned to the ground. We all hope he was just hanging out in the rubble because he's weird like that, but we all feared he started the fire somehow just to watch it burn.

My point is, even though Otis lived with us, that dude lived an entire life we knew nothing about. I think the same thing is going on with all your pets, especially your cats.

In an effort to find out what his feline was up to, this guy made a collar camera for his cat and video recorded his day-to-day activities. I have to say, I'm way more into this video than I thought I would be. I mean, I'd watch this TV show to find out what Gonzo is up to now.

Unlike Otis, Gonzo is actually a good soul. He found another cat who was mean and ornery, much like Otis, and tried to befriend her and bring her gifts. Gonzo does have a weird obsession with trash, but he's a cat so I can't judge that too much.

Enjoy the previously unseen antics of Gonzo while I try to repress the memories of Otis. 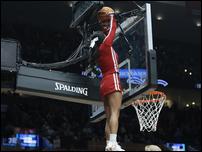 How many athletes does it take to remove a stuck basketball?
×