Longtime Nevada Sen. Harry Reid remembered as 'the embodiment of the American dream'

SALT LAKE CITY — Harry Reid, the former long-serving Democratic senator from Nevada and a member of The Church of Jesus Christ of Latter-day Saints, was remembered fondly on both sides of the aisle Tuesday as news of his death at age 82 was shared.

According to a statement from his wife of 62 years, Landra, Reid died after a four-year battle with pancreatic cancer.

"He died peacefully this afternoon, surrounded by our family," she said. 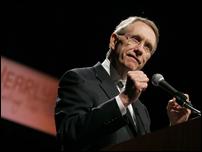 Harry Reid, the former Senate majority leader and Nevada's longest-serving member of Congress, has died. He was 82.

In 2018, Reid underwent surgery for pancreatic cancer, according to the Nevada Independent, although he announced in summer 2020 that he was cancer-free after an experimental surgery.

"We are so proud of the legacy he leaves behind both on the national stage and his beloved Nevada," Landra Reid wrote Tuesday. "Harry was deeply touched to see his decades of service to Nevada honored in recent weeks with the re-naming of Las Vegas' airport in his honor."

A member of The Church of Jesus Christ of Latter-day Saints, Reid's political career spanned 30 years in the Senate. From 2005 until he stepped down in 2017, he led the Senate Democratic Caucus, and from 2007 to 2015 he served as the Senate Majority Leader during both the presidencies of both George Bush and Barack Obama.

On Wednesday, Utah Gov. Spencer Cox ordered flags to be lowered at all state facilities on the day of Reid's funeral.

We have authorized the lowering of the U.S. flag and the flag of Utah in recognition of the life and legacy of Sen. Harry Reid.https://t.co/bWHlI3kjE1

The First Presidency of The Church of Jesus Christ of Latter-day Saints extended condolences to Reid's family in a statement Tuesday.

"Sen. Reid was a devoted and capable public servant who was dedicated to his family, his faith, and his country. We are grateful for his tireless service in each of these facets of a life well-lived," the statement reads. "We pray that Sen. Reid's loved ones will be blessed and sustained at this tender time of parting and in the years ahead."

Utah Sen. Mike Lee took to Twitter Tuesday evening to remember Reid, who he says was his family's home teacher, calling him "a kind, caring friend."

Hatch served in the Senate with Reid during the entirety of his 30-year career. On Tuesday, he said he was "grateful to have known Harry and to have called him a friend."

"Harry Reid was the embodiment of the American Dream. He worked his way up from a hardscrabble youth to become the Senate Majority Leader. I'm grateful to have known Harry & to have called him a friend. My heart goes out to the Reid family at this difficult time."
-OGH

Reid graduated from Southern Utah University, and the school in 2011 named a public lands center — the Harry Reid Center for Outdoor Engagement — after him. But some members of the Cedar City community disliked the Nevada Democrat's politics, including city councilman Paul Cozzens, who spearheaded a fundraising effort to rename the center. It was eventually renamed, although school president Scott Wyatt told KUER in 2014 that he personally apologized to Reid.

"He was from a rural Nevada community and he thrived at the College of Southern Utah (now Southern Utah University). He was involved in extra-curricular activities, discovered a love for learning and realized if he worked hard, he could succeed anywhere. He rose to national prominence and dedicated his life to public service. SUU is honored to be part of Senator Reid's story," the statement reads.

Reid was also a double major at Utah State University, studying political science and history, graduating in 1961. In 2002, the school awarded the senator an honorary doctorate in political science, and in 2019 the Jon M. Huntsman School of Business honored Reid by naming one of five endowed professorships after him.

In a statement, USU President Noelle E. Cockett said the university is "honored to count Senator Harry Reid as an Aggie."

Clay Marsh, a USU grad and former intern and staffer for Reid, said the late senator "inspired me by being exactly who he is and never second-guessing his decision making. He made me feel like an important part of his team even when I was a lowly junior staffer who rarely interacted with him."

Former Utah Gov. Gary Herbert said Reid was known "as a hard working deal maker that made him very effective in passing legislation and enabling his rise to leadership over 3 decades in the senate."

With the passing of former Senate Majority leader Harry Reid we see the end of a remarkable story of someone rising from extremely humble circumstances to go on to become one of the most powerful political figures in America.

Utah House Minority Leader Brian King, D-Salt Lake City, wrote on Twitter that as a Democrat, Reid "swam against the political current" of The Church of Jesus Christ of Latter-day Saints, which may have rubbed many members of the faith the wrong way.

"We need a lot more Harry Reids in the LDS culture," King wrote.

The Utah County Democrats called Reid "a political leader who left quite an impact in U.S. politics."

"Someone who gave three decades of service to the people of Nevada, so we may have a more perfect union," they wrote on Twitter.

It's with sadness we say goodbye to a political leader who left quite an impact in US Politics. Someone who gave 3 decades of service to the people of #Nevada , so we may have a more perfect union. You will be missed #democrats#politics#utpol#utpolitics#utahpolitics#utahpic.twitter.com/OdNHNX9Op4

Before Reid passed, his wife asked former President Obama to share letters that she could read to him, as it was becoming too difficult for the former Nevada Senator to talk over the phone. Obama shared one of the letters Tuesday evening, in which he called Reid "a great leader in the Senate" and "a good friend."

"As different as we are, I think we both saw something of ourselves in each other — a couple of outsiders who had defied the odds and knew how to take a punch and cared about the little guy. And you know what, we made for a pretty good team," Obama wrote.

"Enjoy your family, and know you are loved by a lot of people, including me. The world is better cause (sic) of what you've done. Not bad for a skinny, poor kid from Searchlight."

When Harry Reid was nearing the end, his wife Landra asked some of us to share letters that she could read to him. In lieu of a statement, here's what I wrote to my friend: pic.twitter.com/o6Ll6rzpAX

The mayor of West Wendover, Nevada, a small town pushed up against the Utah border, shared his thoughts on Reid on Tuesday, recalling the impact the senator had on his political aspirations.

"As a kid from rural Nevada, Sen. Reid's story resonated with me deeply and has inspired me for as long as I can remember," wrote Mayor Daniel Corona. "Inspiring me as a kid to have limitless aspirations and as an elected leader to never be afraid of the tough, righteous fights."

As a kid from rural Nevada, Senator Reid's story resonated with me deeply & has inspired me for as long as I can remember. Inspiring me as a kid to have limitless aspirations & as an elected leader to never be afraid of the tough, righteous fights. May he Rest In Peace.

"He never forgot where he came from and used those boxing instincts to fearlessly fight for those who were hurting the poor and the middle class," Schumer wrote on his Twitter account.

He's gone but will walk by the sides of many of us in the Senate every day pic.twitter.com/8T9PiD7vY4

Nevada Gov. Steve Sisolak released a statement Tuesday evening, writing that the word "giant doesn't fully encapsulate all that he accomplished on behalf of the state of Nevada and for Nevada families; there will never be another leader quite like Sen. Reid."

"Perhaps what I appreciate most about Sen. Reid's legacy is he never forgot who he was or where he came from. From humble beginnings in Searchlight, he became one of the state's most powerful and fiercest advocates in Washington, D.C. ... I feel lucky to have known him," Sisolak wrote.

To say @SenatorReid was a giant doesn't fully encapsulate all that he accomplished on behalf of the state of Nevada and for Nevada families; there will never be another leader quite like Senator Reid. My full statement is below: pic.twitter.com/dYuy8xcxIv

Reid's counterpart across the aisle, Senate Republican Leader Mitch McConnell, released a statement calling him "a unique and accomplished American."

"The nature of Harry's and my jobs brought us into frequent and sometimes intense conflict over politics and policy. But I never doubted that Harry was always doing what he earnestly, deeply felt was right for Nevada and our country. He will rightly go down in history as a crucial, pivotal figure in the development and history of his beloved home state," the Kentucky Republican wrote.

"... When Harry retired from the Senate, we both celebrated the fact that our many differences had never really gotten personal. Harry's and my paths in the Senate were roughly parallel. We seemed to reach each institutional milestone within just a few years of each other. I truly appreciated the sincere and cordial relationship we shared behind the scenes when passions cooled."

Colorado Sen. Michael Bennet remembered Reid as a "tough as nails" public servant who "never forgot he was from Searchlight."

Harry Reid never forgot he was from Searchlight, Nevada. He loved his wife Landra and his family. He was a committed public servant and tough as nails.