PROVO — BYU women's basketball is blazing to its best start in nearly a decade.

On Monday, the Cougars made history, too.

BYU surged up to No. 16 in the latest Associated Press Top 25 poll, marking the highest AP ranking in program history. The Cougars are 8-0 after Paisley Harding dropped a career-high 33 points against rival Utah en route to an 85-80 win Saturday night in the Huntsman Center.

It was the fourth win over a Power Five program this year, a list that also includes Arizona State, then-No. 17 Florida State and No. 22 West Virginia. The Cougars also bested Mountain West favorites Fresno State at home.

South Carolina is (again) the unanimous No. 1 team in the top 25, followed by North Carolina State and UConn. Stanford and Baylor round out the top five.

"It gives you some national recognition and helps with recruiting, scheduling and for people to know what type of program you have," BYU coach Jeff Judkins said of the historic nature of the Cougars' ranking. "It really doesn't mean a whole lot right now, but it can help us get some opportunities to get to the NCAA tournament.

"It also means you have a bullseye on your back now and everyone wants to beat you. But you know, we are happy and these girls deserve the recognition. They have worked hard and gone through a lot. I am happy for the seniors and for the girls that came back for another year. It is really just getting started for us and we know we have a long way to go."

BYU has been ranked 23 times in the AP poll era dating back to 1980 according to College Poll Archive, including a program-best nine weeks during the 2006 season that included a season-high ranking of No. 18. Last week's debut ranking at No. 21 was only the second time the Cougars had been ranked since the 2012 season, when BYU averaged the No. 23 mark across three weeks in the Top 25. 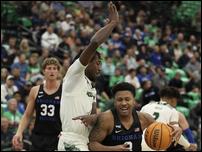 Purdue moves to No. 1 in AP Top 25 for the first time; BYU takes biggest drop

BYU had the biggest drop, losing 12 spots to No. 24 after losing to Utah Valley in overtime and scraping past Missouri State 74-68.

The Cougars are one of four programs nationally ranked in the AP Top 25 in football, men's basketball and women's basketball, joining Baylor, Michigan and Ohio State. BYU men's basketball dropped 12 spots to No. 24 in the latest Top 25 after a road loss to Utah Valley and scraping by Missouri State in the absence of Gavin Baxter, whose season is over with a torn anterior cruciate ligament.

It's the largest drop in the AP poll for the men's team, but the second-largest upward movement in the women's poll. Duke jumped seven spots from the "receiving votes" category to No. 19.

BYU dropped 10 spots to No. 23 in the men's basketball coaches poll. Weber State — which improved to 8-0 with a pair of Big Sky wins — received three votes, and Utah Valley one in the same poll.

The Cougars can tie the best start of the past decade with the 2013-14 team, which finished 28-7 after a run to the NCAA Sweet 16, with a win Friday at Oklahoma. Tipoff is scheduled for 5 p.m. MT on Sooner Sports TV.