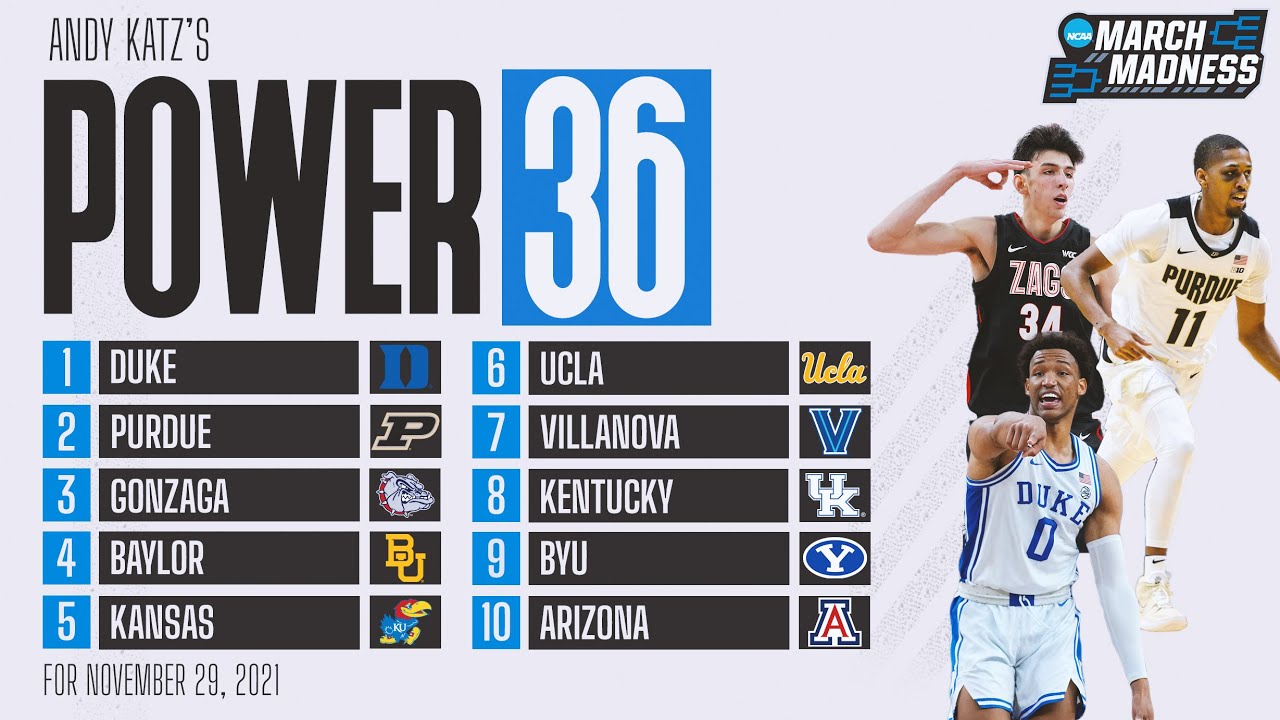 College basketball rankings: Duke and Purdue battle for No. 1 spot in Power 36

Coming off their first rivalry road win in a decade, the Cougars climbed six spots to No. 12 in the latest Associated Press Top 25 after a 6-0 start capped by a 75-64 win at Utah, joining two other schools ranked in the top 25 of the AP poll from Provo.

The latest victory is BYU's first in the Huntsman Center since Dec. 10, 2011.

"These rivalry games are always great," BYU coach Mark Pope said of the battle. "They are always emotional. You can throw the rankings and stats out of the window. Craig (Smith) is a terrific coach, and he is going to make the rivalry better. Our guys came in and fought hard."

The BYU women also debuted in the latest AP women's poll, entering the rankings at No. 21 after wins over Florida State and West Virginia to take the championship of the St. Pete Showcase at Eckerd College in St. Petersburg, Florida. The tournament, highlighted by two wins over top 25 teams in three days, came with head coach Jeff Judkins staying home following a positive test for COVID-19.

Judkins, who was replaced by assistant coach Lee Cummard on the bench for the past three games, is expected to rejoin the team this week — likely in time for Saturday's rivalry game at Utah (5 p.m. MT, Pac-12 Network).

BYU guard Shaylee Gonzales was also named West Coast Conference Player of the Week — the second consecutive honor for the Cougars — after leading the team to three-straight wins during the week. The fourth-year sophomore from Gilbert, Arizona averaged 22.7 points, 5.7 rebounds and 3.0 steals per game in wins over Utah State, Florida State and West Virginia.

Two years after using a medical redshirt to rehab from a torn ACL and a year after the non-counting COVID-19 pandemic-influenced season of 2020-21, Gonzales is averaging a team-high 17.5 points per game to along with 5.5 rebounds and 3.7 assists after

South Carolina leads the AP women's poll with all 30 first-place votes, followed by North Carolina State and Connecticut tied with 704 votes. Stanford and Baylor round out the top five.

BYU, which was picked to win the West Coast Conference with all eight first-place votes, is one of two WCC teams in this week's rankings. Gonzaga received seven votes for their 6-1 start that included wins over Utah, Eastern Illinois and host Hawaii in the Rainbow Wahine Showcase in Honolulu.

Gonzaga's only came at home, 66-62 to Stanford, which is currently ranked No. 4 nationally by the AP.

POLL ALERT: Maryland falls six spots to No. 8 in the women's AP Top 25 as eight of the top 10 teams change places. South Carolina remains unanimous No. 1.

BYU is one of four schools — and the only one from outside the Power Five conferences, or Power Six in basketball — ranked in the AP Top 25 in football, men's basketball and women's basketball. Baylor, Michigan and Kentucky are the others.

At 6-0, BYU men's team are one of 20 teams nationally still unbeaten on the season.

BYU ranks 13th nationally in rebounding margin at plus-11, averaging 41.8 rebounds per game to the Cougars' opponents 30.5. They also rank 20th nationally in assist-to-turnover ratio with 1.57, and are 25th in scoring margin, beating teams by an average score of 78.2 to 59.5.

Gonzaga dropped from two spots to No. 3 after taking its first loss of the season, 84-81 to new No. 1 Duke. Purdue inched up a spot to No. 2, while Baylor and UCLA round out the top five.

As BYU climbs, the challenge remains the same: keeping focus on the next game, especially as the Cougars become the more of a focus nationally — by both the media, pundits and their upcoming opponents.

"Win or lose, you're always dealing with winning or losing. It's always a challenge," Pope said last week after the Cougars' debuted at No. 18 in the AP poll. "Every day, the job is to help each other re-focus on what matters and what is really important.

"But this team has been really good with its energy every day. Every day hasn't been perfect … but I think we all feel it: we need to get way better. This next six-day run is insane. We've got to get better."

BYU opens a three-game road trip Wednesday night against crosstown rival Utah Valley. Tipoff is scheduled for 7:30 p.m. at the UCCU Center in the Cougars' second of four in-state opponents over the next six games.

See the complete AP poll below, or click here.