The University of Utah 2002 Olympic and Paralympic Cauldron Plaza in Salt Lake City on Oct. 29. Thanks to new concerns over COVID-19, backers of bringing another Winter Games to Utah in 2030 or 2034 are going to have to wait even longer to travel to Switzerland for meetings at the International Olympic Committee headquarters. (Kristin Murphy, Deseret News)

SALT LAKE CITY — Thanks to new concerns over COVID-19, backers of bringing another Winter Games to Utah in 2030 or 2034 are going to have to wait even longer to travel to Switzerland for meetings at the International Olympic Committee headquarters.

A planned session to go over the details of the new, more informal bid process being used for the first time to select the host of the 2030 Winter Games had already been moved to Dec. 6, after several participants were unavailable in November.

Now, the IOC has notified the Salt Lake City-Utah Committee for the Games that their Dec. 6 sit-down will be held virtually and will be abbreviated because of the time difference. A longer in-person meeting is expected to be scheduled for after the 2022 Winter Games in Beijing, set to start in February.

Fraser Bullock, president and CEO of the Utah bid committee who also served as the chief operating officer of the 2002 Winter Games in Salt Lake City, acknowledged it was disappointing not to be headed to the IOC's headquarters in Lausanne, Switzerland.

"We have many friends there, acquaintances. We wanted to see them again. But in the context of COVID, we will just have to wait," Bullock said, calling the IOC's decision to move to a virtual meeting prudent, given the emergence of the new omicron variant of the deadly virus that has already restricted travel in some countries. 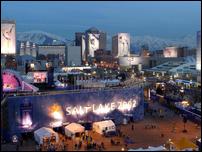 Backers of Utah's bid to bring the Winter Games back to the state in 2030 or 2034 won't be traveling to Switzerland to sit down for the first time with International Olympic Committee officials quite as soon as they'd hoped.

"The whole world is wondering right now about the COVID surge and the omicron variant, so prudence is wise," he said. "Our first priority is everybody needs to be kept safe. Given today's virtual world, we can accomplish much of what we'd like to do, although ultimately the in-person relationship is very important as well."

But there's another opportunity for the bid committee to pitch Salt Lake City to IOC members coming up. Bullock said he, along with bid committee chairwoman Catherine Raney Norman and consultant Darren Hughes, are being allowed to attend the Beijing Olympics despite a ban on foreign spectators due to COVID-19.

"We will still have an opportunity to connect," Bullock said.

Besides dealing with the virus, the next Olympics has already generated controversy over China's human rights record, with Utah Sen. Mitt Romney, the former leader of the 2002 Winter Games, and others pressing for a diplomatic boycott.

The USOPC has yet to decide whether Salt Lake City is bidding for the 2030 or the 2034 Winter Games, but is expected to hold its December board meeting in Utah at the same time Olympic speedskating trials are being held at the Utah Olympic Oval in Kearns.

The IOC has declined to confirm which bid cities have already met with officials. On Nov. 12, Gov. Spencer Cox, USOPC Chair Susanne Lyons and Bullock had a virtual meet-and-greet with members of the IOC's Future Host Commission for the Olympic Winter Games, the start of the new bid process.