FILLMORE — Imagine somebody using your name to try to rip people off. It happened to a Fillmore woman who sells dogs. Now, scammers are using her identity to dupe people looking to get a new pet out of their money.

Leona Moat says she's worked hard for the seven years she has been in the breeder business to establish a good reputation, but now that good work is quickly being undone.

"About a year ago, I noticed that people were taking pictures from my page," Moat told the KSL Investigators.

Cybercriminals were stealing pictures Moat posted to Facebook advertising her real, legitimate dogs. Those pictures were then used to create bogus Facebook pages designed to trick pet buyers into sending money. But the photos were not the only thing they were stealing from her.

"Now, they've been taking my name and they say Leona Moat Doberman pinchers," she explained.

The scammers are using her name in their schemes, and she says victims have been tracking her down and chewing her out. Some have even called the police on her.

"They said there's a case against you," Moat said of her visit with the police. "I'm like, look, it's not me, but it does say my name. I mean I can't, you know, argue that."

Pet scams are not new, but they are growing with fervor as people spend more time at home and look for a companion.

According to data from the Better Business Bureau, complaints have increased by more than 450% in the past 5 years. The median loss reported to the BBB in 2020: $750.

This scam doesn't target just the elderly. In fact, those between ages 35 to 55 accounted for half of the complaints filed with the BBB reports last year.

"I had a girl message me yesterday that she's like, 'I think I just got scammed by these guys,'" said Moat. 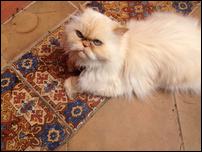 Carolyn Barg thought she'd be welcoming two kittens into her home by now. But when the kittens never showed up, she says she knew something was wrong.

She said she is doing what she can to try to clear her name and to thwart the scammers. She reports bogus listings to try to get them removed. And she reached out to the KSL Investigators in hopes that viewers who see her story are armed with information that can help them avoid the con.

According to the BBB, "a shocking 80% of sponsored pet advertisements may be fake."

The best advice to avoid being duped is to make sure you see the pet in person before paying any money. With the ongoing COVID-19 pandemic, consider a video call with the seller so you can see the seller and the actual pet for sale. If the seller refuses, walk away — it likely is a scam.

Other steps you can take to avoid getting tricked into buying a pet that doesn't exist include doing some research that will get you a sense of a fair price for the breed you are considering. Think twice if someone advertises a purebred dog for free or at a deeply discounted price — it could be a fraudulent offer. Also, check out a local animal shelter online for pets you can meet before adopting.