Utes drop out of AP Top 25, BYU moves in at No. 23 following rivalry win

BYU players celebrate and Utah players look for the exit as they fall to the Cougars in an NCAA football game at LaVell Edwards Stadium in Provo on Saturday, Sept. 11, 2021. BYU won 26-17, ending a nine-game losing streak to the Utes. (Scott G Winterton, Deseret News)

SALT LAKE CITY — The season is still young, but one game had a big impact on two local teams in this week's college football rankings.

The BYU Cougars got the best of in-state rival Utah Saturday night in an electric LaVell Edwards Stadium and snapped a nine-game losing skid to the Utes in a 26-17 win.

Not only did the Cougars get the win, but they dominated the Utes at the line of scrimmage and never left any doubt they'd come out on top. It was the cherry on top to arguably its best-ever week in program history.

As a result, the Cougars went from unranked to No. 23 in the Associated Press Top 25 poll and in the USA Today Coaches Poll. It's the first time the Cougars have been ranked this season since spending a majority of the 2020 season ranked high in the polls during their 11-1 season.

USC, which was previously ranked No. 14, also fell in the rankings after Stanford dismantled the Trojans on their home turf. The Utes and Trojans, however, are still receiving votes this week in the AP poll.

But not all was bad for the Pac-12 this week. In the highlight game of the weekend for the conference, Oregon escaped Columbus with a win over Ohio State, who was previously ranked No. 3. The Ducks move up to No. 4 in the AP poll and in the Coaches Poll, and is the best-positioned team from the conference to be in contention for the College Football Playoff. 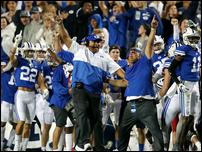 The day started out so promising for the Pac-12: Oregon did what the conference hadn't done in a long time.

Joining the Ducks from the Pac-12 in the rankings this week is No. 13 UCLA, which had an early-season bye week, and No. 19 Arizona State. The Bruins move up three spots on the bye week and appear to be the favorite to win the South division at this point in the season. The Sun Devils will travel to Provo to take on a red-hot Cougars program.

Alabama remains at the top of the rankings this week with 60 of the 63 possible first-place votes. Behind the Crimson Tide is No. 2 Georgia, which received three first-place votes; No. 3 Oklahoma; No. 4 Oregon; and No. 5 Iowa, which moved up five spots after a win over in-state rival Iowa State. Ohio State dropped to No. 9 in the rankings after its loss to Oregon.