Several families filed a lawsuit Monday seeking to overturn a ban on mask mandates in Utah schools. But this is new territory for the court system. ( Scott G Winterton, Deseret News)

SALT LAKE CITY — The families suing to overturn a ban on mask mandates in Utah schools are wading into largely uncharted legal waters.

The parents contend their children have health issues making them vulnerable to COVID-19 and can't safely sit in classrooms if masks are optional. They say the state is denying the kids' right to receive the same education as their classmates, violating a guarantee in the Utah Constitution.

While laws vary from state to state, similar arguments have played out in courts across the country in recent weeks. The lawsuits have survived early stages of court battles in Texas, Florida and Arkansas, said attorney Greg Skordas, who's representing the Utah families.

But the last time the Utah Supreme Court considered a case similar to the one he filed Monday was in 1900, the lawyer said, just four years after Utah attained statehood.

The justices ultimately allowed schools to require vaccines for students as smallpox outbreaks ravaged the state 121 years ago. Since then, disputes over public health measures to limit epidemics have largely stayed out of Utah courts, Skordas acknowledged.

"We're breaking new ground here, and we understand that," Skordas said Monday. "Who knows what a judge is going to say?"

The lawsuit is the latest in a national flurry of legal challenges seeking to overturn mask mandates in some states and allow them in others.

Twelve states and the District of Columbia require masks in K-12 schools, while New Mexico does so for the nonvaccinated, according to the Pew Research Center. A total of 29 states are allowing school districts to decide.

Utah, neighboring Arizona and six other Republican-led states have blocked such requirements. They face possible legal action from federal education officials at the direction of President Joe Biden, a Democrat.

Utah's Republican Gov. Spencer Cox has defended the state's tactic. He noted last week that Utah is giving N95 masks to students and teachers this year.

"As we continue conversations with legislators, public health leaders, school leaders, parents, and local health departments about the best way to safely return to schools given the unique circumstances in Utah, the last thing we need is threats from out-of-touch bureaucrats at the U.S. Department of Education," the governor's office said in a statement. 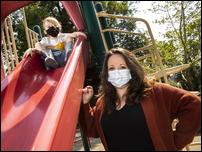 Why this mom and other parents are suing Gov. Cox and Salt Lake County over Utah laws prohibiting school mask mandates

A group of parent filed a complaint in 3rd District Court challenging the constitutionality of laws passed by the Utah Legislature and signed into law by Gov. Spencer Cox that limit pandemic restrictions, like mask orders, which they claim hinders Utah public schools' ability to safely fulfill children's right to a free public education.

In states banning the mandates, more school districts are going against the recently passed laws and some are facing threats of defunding. Salt Lake City Mayor Erin Mendenhall's order requiring masks in the city's schools was condemned by a GOP legislative leader in a Facebook post on Monday as "NOT enforceable." House Majority Whip Mike Schultz said he believes Utah lawmakers may need to codify ramifications for when officials overstep the authority imposed by the Legislature. Mendenhall maintains she did not.

While children are less likely to get sick and die from COVID-19 than adults, more are being hospitalized and dying. Those under 12 are not yet eligible for the shots. The American Academy of Pediatrics has advised everyone in schools over age 2 to wear a mask, regardless of vaccination status.

After widespread vaccination eliminated smallpox, the illness is no longer a concern, Skordas noted.

"As we look back now, you think, 'Well, of course we should have done that,'" Skordas said. "And I think we're going to do the same thing 10 years from now when we talk about masks and think, 'We could have fixed this whole problem so much easier and so much sooner if we had just enforced — or even encouraged — more masking up."

Leslie Francis, professor of philosophy and law at the University of Utah, said she perceives the families' legal strategy as clever.

Utah's Constitution requires state lawmakers to provide a public education system "open to all children of the state," Francis noted.

"The problem is that the Legislature is not maintaining an education system that is open to all children of the state. With a ban on a mask mandate, it's impeding local school districts from maintaining what they consider to be safe schools," Francis said. "At least that's the state Constitutional argument I'd make."

Francis said there are arguments to be made under multiple federal laws guaranteeing access to education for those with disabilities. But there also may be some students with conditions that make them unable to safely wear a mask, she said — a reality that a combination of virtual and in-person learning or A and B days may be able to address.

The families will have a difficult time prevailing on equal protection claims they raise in the lawsuit, predicts Paul Cassell, a former federal judge and also a law professor at the University of Utah. Federal judges tend to leave similar matters up to state and local authorities, he said.

The legal questions surrounding education on a state level, however, are "uncharted territory," Cassell said. The U.S. Constitution doesn't address education, and state provisions tied to schooling haven't come up often in the courts.

"To the extent they're relying on a right to education, that is very much undertheorized and underdeveloped as a matter of litigation," Cassell said.