Motorcyclists participate in a memorial ride in Orem on Saturday. The annual ride is for a Utah Marine killed in Afghanistan in 2010, and this year it took on a little more significance. (Aubrey Shafer, KSL-TV)

OREM — A memorial ride for a Utah Marine killed in Afghanistan has taken place every year since his death in 2010, but this year, that ride took on a little more significance.

Bikers sure like to look tough — the dark clothes, the shiny chrome, beards and sunglasses. Get to know them, though, and most are as soft as the leather seat they like to sit on.

"I'm just grateful for everything that has been done for us," said Ken Plante while trying not to choke up. "Sorry, umm, I just want to show it."

So, when Plante and his motorcycle friends with the Patriot Guard Riders heard a ride was being done for a Marine who gave his all, well, it didn't matter how much gas prices were.

"It can be very emotional. These kinds of things just make you feel good," said Plante.

Messages like never forget, which you can find on their motorcycles and on trucks, should mean something, especially for Nigel Olsen — a Utah Marine who was killed during combat in Afghanistan in 2010.

"It was kind of a no-brainer," said Mike Bischoff. "There was really, not really a choice as to whether I was or wasn't going to be here today."

The ride was put on by the group Trucks 4 Heroes.

The goal was to raise money for a scholarship in Olsen's name at Mountain View High School in Orem. 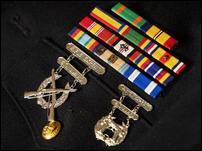 As Kim Olsen watched the chaotic images in Afghanistan, her thoughts turned to the Afghan citizens who now might not be able to escape the new regime. She thought about the Afghan interpreters and others who risked their lives to help American troops like her son, who died in 2010.

"It's the least I can do for those who served our country. They do so much for us that goes unnoticed," said Joseph Park, who founded the Trucks 4 Heroes group.

The ride started in Orem and ended at the Payson Cemetery, where Olsen is buried.

She has done a ride every year since her son's death and is happy people still want to be a part of it.

"To have these people show up in memory of my son, Lance Cpl. Nigel Olsen, means the world to me," she said.

Olsen said her son wanted to serve his country since he was a little boy. He would play Army around their home, crawling on the ground with a toy gun and face paint.

"We had to have a flag flying in our yard from the time he was little," said Olsen. "He was always a patriot."

So, she wasn't surprised when he signed up for the Marines after graduating high school.

She also remembers the last conversation she had with him when he was in Afghanistan.

"His prophetic words were, 'Mom, if anything happens to me, they will come to you in person,'" she said. "Five days later, uniformed officers, Marine officers, came to my work and let me know my son had been killed by an IED (improvised explosive device)."

With everything currently going on in Afghanistan, Olsen wants others to know his service, and the services of thousands of others, wasn't for nothing.

"They made a difference over there. The women and the children who were able to learn to read and walk freely in the streets," she said during the ceremony at the cemetery. "Nothing will ever change my mind about the pride I feel for my son and for his service."

It's all enough to make even the toughest biker pause.