Taylor R. Randall flashes a "U" after being named the next president of the University of Utah at Rice-Eccles Stadium in Salt Lake City on Thursday. (Spenser Heaps, Deseret News) 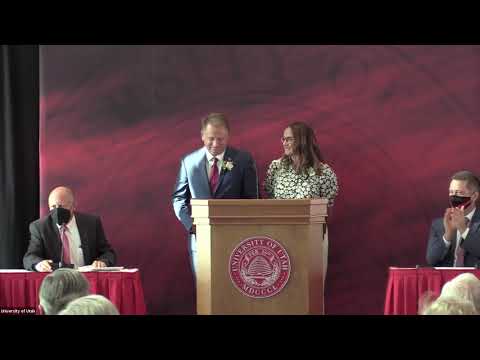 "I have big aspirations for this university. We can be a premier institution, and we will because I have an abiding faith in the students, in the faculty, and the staff that I have seen through my entire career give endless, endless hours of service when they did not need to," Randall said after leaders of the Utah Board of Higher Education announced his appointment Thursday evening on campus.

"There is no question in my mind that we will be able to accelerate the progress that the predecessors have left us and entrusted to us," Randall said.

President emeritus Ruth Watkins "did an amazing job here. She has shown that completion rates can change quickly. Let's latch onto that," he said.

"The University of Utah is at a key turning point and is growing in national and international prominence," said Harris H. Simmons, Utah Board of Higher Education chairman and search committee co-chairman.

"Dr. Taylor Randall is an exceptional leader who has led the University of Utah's David Eccles School of Business to great success, and I am confident he will bring those strengths to his new role as president of the U of U. Dr. Randall's years of institutional knowledge and innovative solutions will enable even more students, faculty and staff to reach their full potential," Simmons said.

A key era for the U.

Randall will become president during the ongoing COVID-19 pandemic, a national reckoning on educational equity and social justice, and a sea change in how education is delivered.

As the campus seeks to resume largely in-person instruction, Randall inherits a community with ongoing concerns about physical safety after two high-profile homicides on campus in recent years and floundering efforts to reform policing policies and practices.

In the fall of 2017, ChenWei Guo, 23, was killed during an attempted carjacking near the gates of Red Butte Garden.

In October 2018, student-athlete Lauren McCluskey was fatally shot outside of her dorm by a man she had dated. McCluskey's parents sued the university and in November 2020 reached a $13.5 million settlement of their two lawsuits. As part of the settlement, the university acknowledged it mishandled McCluskey's multiple reports to police.

Randall joined the University of Utah in 1999 and has served as dean of the David Eccles School of Business for 12 years. Under his leadership, the school has gained a national reputation as a place of innovation, garnering top 10 entrepreneurship rankings for both undergraduate and graduate programs. Seven of the school's programs are ranked in the top 25.

"It's impossible for me to overstate how excited I am for this announcement. Taylor Randall represents the best of our state and the U. He has been a friend and mentor and helped guide our state's economy through the pandemic. This is a brilliant pick," Gov. Spencer Cox tweeted soon after the announcement.

It's impossible for me to overstate how excited I am for this announcement. Taylor Randall represents the best of our state and the U. He has been a friend and mentor and helped guide our state's economy through the pandemic. This is a brilliant pick. https://t.co/yoDi6p0OrS

Although the search committee considered national candidates, they said Randall's history with the school shows he's poised to lead.

"Dr. Randall is a seasoned administrator, and I am excited for him to bring his passion for the university's mission and his proven track record of success from the David Eccles School of Business to the central administration of the university," said Christian Gardner, Board of Trustees chairman and search committee co-chairman.

"He is well prepared to lead the University of Utah and I look forward to supporting his vision for the university in the years ahead," Gardner said.

During his time as dean, experiential learning opportunities have expanded along with the institutes and centers that offer experience to students in fields ranging from finance to social impact to policy creation. The Marriner S. Eccles Institute for Economics and Quantitative Analysis, the Sorenson Impact Center, the Kem C. Gardner Policy Institute, and the Goff Strategic Leadership Center all have opened under Randall's direction.

Before assuming the role of dean, Randall served as a professor of accounting for 11 years, earning accolades throughout his teaching career. He has received awards for the best teacher in the MBA, executive MBA and undergraduate programs as well as the Brady Superior Teaching Award, which is a career achievement award.

Randall earned an undergraduate degree with honor in accounting from the U., followed by an MBA and doctorate in operations and information management from the Wharton School of Business at the University of Pennsylvania. 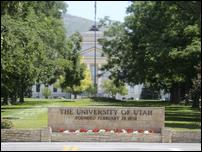 Where will the next U. president take the state's flagship university? 3 finalists reveal their vision in campus forums

Regardless of who is selected the next president of the University of Utah, societal, public health and economic forces ensure it won't be business as usual at the state's flagship university.

Gardner said over the last seven months, a search committee has "worked tirelessly to find the best candidate" for the university. The committee received hundreds of emails, calls and texts from residents throughout the state, he said, emphasizing that they all were read and evaluated.

He thanked all the candidates who participated, particularly the three finalists.

"They were unbelievably talented, all very gifted, and every one of them is exceptional and would be a great leader at the university," Gardner said.

The other finalists included Byington, who currently serves as executive vice president for the University of California's health enterprise and a professor of pediatrics at the University of California, San Francisco. Meanwhile, Murthy currently serves as the Ronald and Valerie Sugar Dean at the UCLA Henry Samueli School of Engineering and Applied Science.

"I want to thank the board and the selection committee for the thorough job that they did. We had great candidates. We would've been in great shape, whoever they chose," Randall said.

Watkins, selected the university's 16th president in 2018, stepped down in April after accepting the position of president of Strada Impact. Strada is a national social impact organization that works to strengthen pathways between education and employment. Watkins, the first woman to hold the position, served for the shortest tenure in the university's history.

Dr. Michael Good, CEO of University of Utah Health and executive dean of the School of Medicine, has been serving as interim president. He did not apply for the position.