Jade Carey's long road to the Olympics ends with gold

Jade Carey, of the United States, performs on the floor during the artistic gymnastics women's apparatus final at the 2020 Summer Olympics, Monday, Aug. 2, in Tokyo, Japan. Carey has (Gregory Bull, Associated Press) 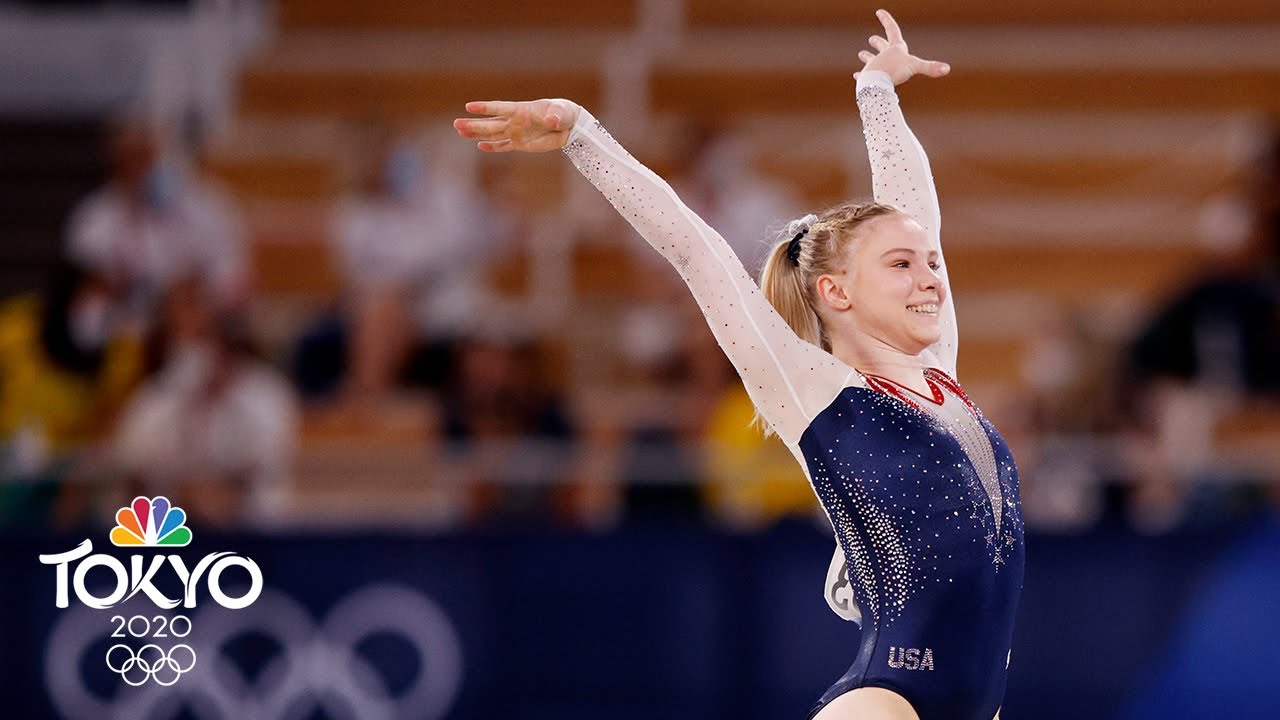 TOKYO — Jade Carey traveled the world for a spot in the Olympics. Germany. Qatar. Azerbaijan. Australia.

A lot of long flights. A little bit of jet lag. One unrelenting vision of what could be possible.

She wasn't going to let a little thing like a sticky patch of carpet get in her way.

The 21-year-old American gymnast soared to gold in the women's floor exercise Monday night, her powerful and precise routine capping a roller-coaster 24 hours in which she narrowly avoided serious injury during the vault finals when her right foot caught just as she was preparing her entry.

Carey's score of 14.366 gave the U.S. women's team its fifth medal of the Games and assured that each of the six athletes who came to Tokyo — Carey, Simone Biles, Sunisa Lee, Jordan Chiles, Grace McCallum and MyKayla Skinner — will be checking some serious bling in customs when they return home.

Considered one of the favorites after coming in second during vault qualifying, Carey was thundering down the blue runway Sunday when she tripped. Her planned Cheng vault instead became a simple back tuck, her medal chances evaporating in the process.

Stunned, she recovered in time to complete her second vault but finished well off the podium before quietly retreating to the waiting arms of her father Brian, her lifelong coach, and the comfort of her teammates.

Knowing his daughter had less than a day to regroup in time for the floor finals, Brian Carey turned off the "coach" switch and flipped on the "dad" one.

"I told her, 'You know, right now, you feel like yesterday was the worst day in your life, but today can be your best day. So just don't give up. Keep going,'" Carey said. "And she killed it."

Carey doesn't leap off the floor as much as she explodes. Her tumbling is as dynamic as anyone in the world not named Simone Biles, and she's working on a triple-twisting double-layout element that — if she ever completes it in international competition — will be given the single-highest difficulty value of anything currently being done in the sport.

While it's not quite ready to be unveiled when it counts, Carey also didn't need it. A day after her meandering road to the Ariake Gymnastics Centre nearly ended in disaster, she responded with what she called the best routine of her career.

Carey could hear teammates roaring from the stands during her routine, Biles perhaps the loudest of them all.

"They were honestly the best teammates ever, especially (Sunday) night," Carey said.

Even if they aren't teammates, at least, not technically. Carey earned a spot in Tokyo by taking advantage of what turned out to be a one-time-only offer by the International Gymnastics Federation. The sport's governing body made a provision for the 2020 Games that allowed athletes to lock up an individual nominative spot if they racked up enough points at World Cup events.

So the Careys spent 16 months flying to different continents, piling up podiums on vault and floor exercise along the way. They formally accepted the spot on the eve of the U.S. Olympic Trials, even though they knew it meant she was giving up a shot at making the four-woman team that ended up winning silver during the team competition last week.

Sound confusing? It is. The FIG has already abandoned the practice and is returning the team sizes to five women per country for the 2024 Games in Paris.

Yet all the paperwork and the politics and the patience paid off with a performance that brought her teammates to their feet and her father to near tears.

"It was definitely hard sometimes," Jade Carey said. "I'm really glad that we stuck with our decision and did what we did. It was for the better."

"This means everything to me. It's all I've ever worked for and dreamed of and I'm just very proud that it happened tonight."

Vanessa Ferrari of Italy earned silver, the 30-year-old's first Olympic medal after near misses in Rio de Janeiro in 2016 and London in 2012. Her dramatic routine — one that would fit right in at La Scala opera house in Milan — gave Italy its first women's gymnastics medal since 1928 and capped a long comeback from a torn Achilles tendon four years ago.

"I am super happy with this medal," said Ferrari, who is considering retirement. "I was hoping this would finally be my Olympics."

Angelina Melnikova of the team representing the Russian Olympic Committee and Mai Murakami of Japan were awarded the bronze after finishing with identical scores. Their 14.166 included the same difficulty (5.9) and execution scores (8.266). The medal was the third in Tokyo for Melnikova, who earned gold in the team competition and bronze in the all-around.

Shin Jeah-wan of Korea beat ROC's Denis Abliazin in a tiebreaker to claim gold on men's vault. The gold is the 10th for Korea in gymnastics and fifth on vault. Shin won the tiebreak because he recorded the highest-scoring single vault between the two. Artur Davytyan of Armenia took bronze.

China's Liu Yang edged past teammate You Hao to claim gold on still rings. Greece's Eleftherios Petrounias took the bronze to go with the gold he captured in Brazil.

Five years removed from a horrific broken left leg suffered in Rio de Janeiro, Samir Ait Said of France came in fourth, sticking his dismount on the leg once so mangled it appeared his career was in jeopardy. Said admitted he's dealing with a left bicep injury so severe his coach tried to convince him to opt out. Instead, he pressed on.

Asked if he believes bad luck is following him around at the Olympics, the 31-year-old shook his head.

"Because I'm going to win in Paris in three years."