The Jackson Women’s Health Organization clinic, more commonly known as "The Pink House,” is shrouded with a black tarp so that its clients may enter in privacy in Jackson, Miss. on May 19, 2021. Utah joined two dozen states Thursday in support of a Mississippi abortion case asking the U.S. Supreme Court to overturn its landmark ruling in Roe v. Wade. (Rogelio V. Solis, Associated Press)

The amicus or friend-of-the-court brief also asks the court overrule Planned Parenthood v. Casey, a 1992 high court ruling that upheld the constitutional right to abortion, but allowed states to regulate the practice to protect the health of the mother and the life of the fetus.

The states argue in the 44-page brief that the Supreme Court has advanced a constitutional law of abortion for half a century that no one can describe with any certainty. Because the purported right to abortion lacks any textual or historical foundation, it is defined only by the court's constantly changing opinions, they wrote.

"This challenge to Mississippi's 15-week law presents the court with an opportunity to remedy those problems by reconsidering and overruling their source — Roe v. Wade and Planned Parenthood of Southeastern Pennsylvania v. Casey. Unlawful from the day each was decided, both have kept Amici States in continual litigation as the Court changes the constitutional test and rules," according to the brief.

"The time has come to return the question of abortion to where it belongs — with the states."

Mississippi banned nearly all abortions after 15 weeks of pregnancy in 2018. The 5th Circuit Court of Appeals held that the state's restriction was an unconstitutional ban on a woman's right to terminate a pregnancy before fetal viability. Mississippi petitioned the Supreme Court, which agreed to hear the case in its next term starting in October. 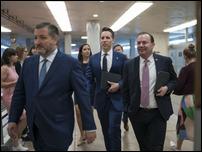 "Nothing in the Constitution prevents states from enacting reasonable measures to safeguard the dignity of all human beings, including the unborn," she said in a statement. "The legal challenge to Utah's law is stayed pending the outcome of the Supreme Court's decision, but the Attorney General's Office will continue to vigorously defend Utah law."

The Utah Legislature passed a law in 2019 banning abortion after 18 weeks gestation. A federal judge put the law on hold pending the outcome of the Mississippi case.

Planned Parenthood of Utah sued the state, arguing the law is unconstitutional and that no fetus is viable at 18 weeks, and that the ban is a violation of more than four decades of settled Supreme Court precedent.

Since that Supreme Court decision, no court has upheld a law banning abortion prior to viability, according to the lawsuit. The Utah bill originally set the limit for legal abortions at 15 weeks gestation, but it was revised to 18 weeks before the Republican-controlled Legislature passed it largely along party lines.

"Regardless of one's view of the Supreme Court's abortion precedent, it is the attorney general's duty to defend the laws of the state of Utah," Holyoak said.

Lee and Sens. Josh Hawley, R-Mo., and Ted Cruz, R-Texas, argue in the 33-page brief that the status quo is "untenable." They asked the court to use a Mississippi case to be heard in its upcoming term to unwind Roe v. Wade and related abortion decisions.

"Where a legal doctrine has repeatedly failed to offer clarity — where it has proved unworkable in the past and will likely engender unpredictable consequences in the future — its existence constitutes an open invitation to judges to interpret it according to their own policy preferences, usurping the constitutional prerogatives of the legislature," the senators wrote.

"Roe and Casey should be overruled, and the question of abortion legislation should be returned to the states."