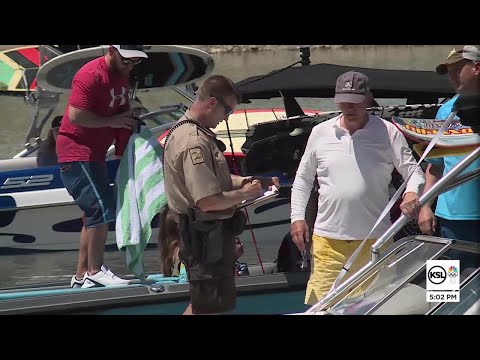 BRIGHAM CITY — Utah State Park rangers urged boaters at Willard Bay State Park to be safe while out on the water this holiday weekend, especially after several drownings have been reported in the past month.

Rangers were out Saturday afternoon performing boat safety checks, while also making sure everyone was wearing a life vest.

It's on picture perfect days like the one Saturday afternoon where Kim Walpole doesn't need much motivation to get his boat out.

When his kids said let's go to Willard Bay, it didn't take long for them to get ready.

Hundreds, if not thousands, of people had the same idea. However, no matter where they went, safety was coming along, which meant life vests for everyone.

"My son's last year said, 'I'm not going boating with you anymore, you're just too bossy,'" said Walpole with another laugh. "I said, 'Yeah, because it's scary. You can really get hurt out on these boats, so you got to be really careful.'"

That's exactly why Utah State Park rangers were at Willard Bay on Saturday.

Rangers were checking boats to make sure they're registered and have the necessary safety equipment. After another death Saturday morning, this time at Deer Creek Reservoir, making almost a half dozen so far in the past month, rangers were making sure everyone had a life vest.

A man died after capsizing a canoe at Deer Creek Reservoir on Saturday afternoon, police said.

"We just want to make sure it stays fun and people stay safe," said Ben Meraz, who is a Utah park ranger. "Twelve and under, obviously it's required, but everyone should have it on. You think you know how to swim, but then you get out there and you don't really know how to swim, the weather changes, the water is too cold, and you just react in different ways."

It can be inconvenient for boaters to have these checks.

Walpole remembered when he didn't have a necessary item a few years ago.

However, he said he's also grateful rangers are doing them.

"My brother was visiting from Florida, and he said they don't check on us out here, so that's pretty neat they check on you guys at these little reservoirs," he said.