Why Mitt Romney says 'the world has changed,' and what that means for fighting wildfires in the West

Sen. Mitt Romney, R-Utah, center, talks to Draper Mayor Troy Walker, left, and Draper Fire Chief Clint Smith after a press conference at the Little Valley Trailhead in Draper on Friday. During the press conference, Romney announced his bill to establish a wildfire commission that would conduct a national review of wildfire policy and make recommendations to Congress. (Spenser Heaps, Deseret News)

DRAPER — Blaming the American West's "unprecedented" wildfire problem on decades of poor forest management and the reality of a hotter and drier climate, Sen. Mitt Romney on Friday unveiled a bill to create a new commission to tackle the issue.

Romney announced the proposed legislation, the Wildland Fire Mitigation and Management Commission Act of 2021, at a news conference near the Little Valley Trailhead, located in the rolling hills of Draper south of Salt Lake City, where neighborhoods of massive homes are nestled in the foothills.

Squinting in the scorching sun as Utah and the West continue to choke in an unprecedented drought fraught with wildfire risk, the Utah Republican senator said federal officials need to break free from their current ways of wildfire management, which he said clearly hasn't been working.

"Our state is dry, and we keep seeing bigger fires and conflagration that is daunting and dangerous," Romney said. "Lives have been lost, structures have been lost, businesses have gone out of business because of fire. And we keep doing things the way we've done them in the past, without recognizing that the world has changed."

Romney pointed to climate change and its impacts on Western states like Utah as a matter of fact.

"It's getting drier in the American West," Romney said. "Our state's getting drier. The fires are becoming bigger. The loss of life is more significant. And continuing to do the things the way we've done them in the past doesn't make a lot of sense."

So that's why Romney said he and bill sponsor Rep. John Curtis, R-Utah, have worked with Arizona Sen. Mark Kelly on the Wildland Fire Mitigation and Management Commission Act to create a commission to mitigate and prevent wildfires that is made up not just federal officials, but also local officials and wildfire experts.

"It's an attempt to say, 'Well, frankly, we can learn from some others,'" Romney said, noting that officials in Australia formed a similar commission to "recognize that the climate is changing. It's getting hotter and drier. How do we protect our lands and our people in this new circumstance?"

For funding, Romney said, the bill will seek what may be millions out of roughly $42.5 billion proposed for "resiliency" in a nearly $1 trillion, five-year infrastructure spending plan he and a group of nine other bipartisan senators have agreed upon. It's unclear whether the Senate plan will garner enough support as it is less than President Joe Biden's $2.6 trillion proposal. House Speaker Nancy Pelosi signaled earlier this week it may run into trouble.

Romney noted he's no wildfire "expert," but he listed off possible solutions the commission could explore: Cutting red tape for controlled burns whose permits, he says, take too long to obtain; allowing more highly flammable dead wood to be removed from forests for commercial purposes; or funding more aircraft to assist firefighters.

While "everything runs into hurdles in Congress," Romney said he believes the legislation, sponsored by Curtis and co-sponsored by Kelly, has "a good shot" of passing.

"Look, we got people across the American West for whom this is a real issue," Romney said, pointing to the tragedies in California where thousands of homes have been lost to wildfires. "So whether you're Republican or Democrat, you know, this is an issue we've got to tackle."

Asked by a reporter if his party is starting to take climate change more seriously and if that means there's a better chance for bipartisan solutions to climate change, Romney said, "I think there's a recognition on both sides of the aisle that the planet is getting hotter and drier, particularly in the American West." 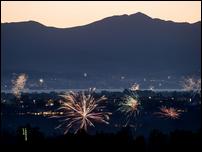 Why Gov. Cox says he can't enact a statewide ban on fireworks even during this record drought

Gov. Spencer Cox said Thursday if he had the authority to issue a statewide ban on fireworks, he would.

Asked if he believes Utah should ban fireworks amid the drought and wildfire risk, Romney deferred to Gov. Spencer Cox, who said Thursday he wants to ban them but doesn't have the power under Utah law.

"l'll leave that up to the governor as to what he thinks is the right thing to do," Romney said, adding that cities and towns can also "make their own decisions in that regard."

However, Romney also urged Utahns to be "pretty darn careful" to reduce the risk of wildfires.

Cox in a prepared statement thanked Romney, Kelly and Curtis for their work on the bill, also pointing to Utah's "unprecedented wildfire and drought conditions."

"There is no better time than now to work together to improve policy and focus on practices that can make a difference for our future, including better prevention, mitigation, management and rehabilitation," Cox said.

"It's a commonsense approach, which would elevate local leaders and make sure they have a seat at the table with the federal partners to assess and make recommendations on wildland fire mitigation and land maintenance in order to prevent future wildland fires from becoming catastrophic disasters," Walker said.

Jamie Barnes, acting director of Utah's Division of Forestry, Fire and State Lands, called the wildfire dangers from the drought "real and unprecedented" in Utah. Over 380 fires have already charred more than 40,000 acres across the state, she said.

"Fire sense is more important than ever before, with 85% of these fires being human-caused," Barnes said. "Drought is real, and it's concerning. Lakes and rivers are drawing to historical lows, which makes challenging decisions on all levels."

The Wildland Fire Mitigation and Management Commission Act of 2021, would, according to a summary from Romney's office: