"In The Balance: Ballet for a Lost Year" is a documentary series presented by Ballet West that shadowed dancers throughout the company's preparation for a performance in the middle of the pandemic. (Ballet West) 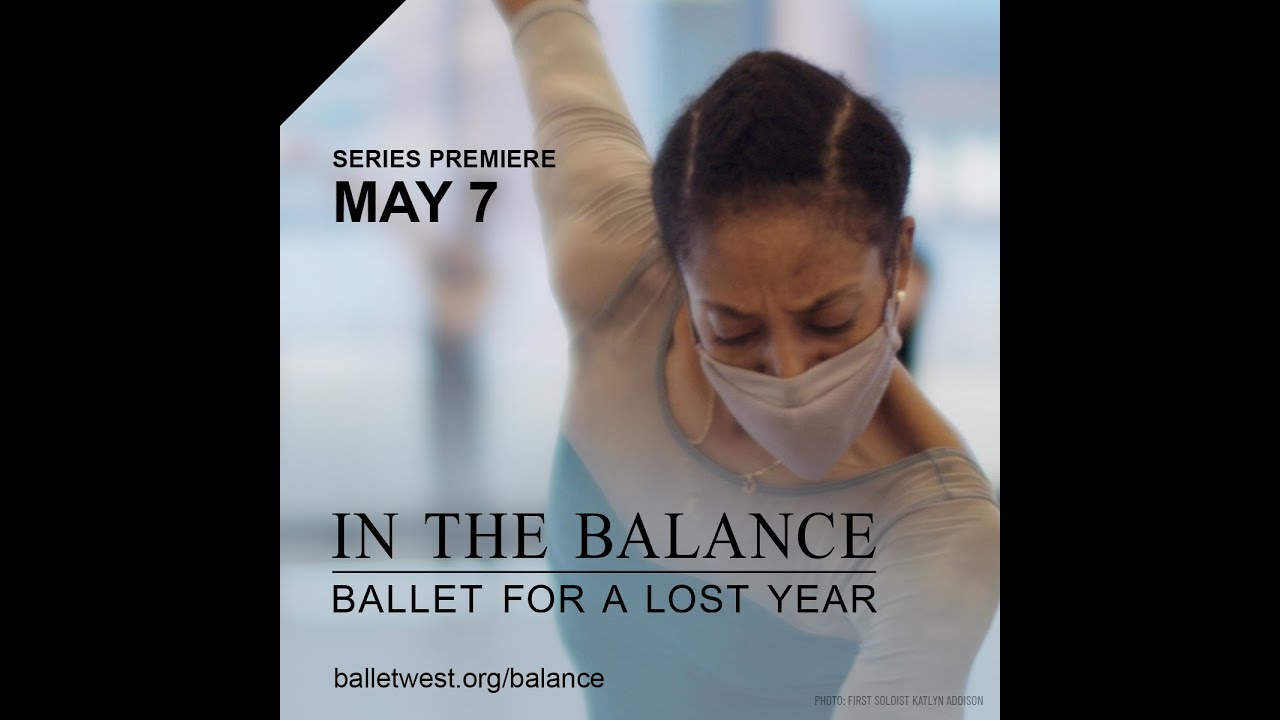 IN THE BALANCE: Ballet For a Lost Year

SALT LAKE CITY — A new Ballet West documentary series provides a rare glimpse behind the curtain and behind the facades of performers as the company prepared to stage performances in November amid a pandemic and national turmoil.

Ballet West and Skyscade Studios released its nine-episode documentary series in May, spotlighting the ballet company as it attempted a return in the middle of the pandemic. "In The Balance: Ballet for a Lost Year" is backdropped against the volatile state of the world as the company began its first public performances in an era marked by a public health crisis — a feat no other major ballet companies were attempting.

Filmmakers Diana Whitten and Tyler Measom directed the series and followed the dancers, crew and staff as they attempted to stage a live production.

"All of the training, all the choreography, all of the people that set the stage and set the lights and handed you the tickets, and we tried to show that in this project," Measom said. "In the making of something like this, everything that goes on behind it that the audience will never see and should never see, there was a real symbiosis between the dancers and us."

"I mean the nuts and bolts of the story is this ballet company attempting to stage a live production under very unusual and challenging circumstances," Whitten said. "And so that in itself is super interesting how they navigated that, but the underlying themes of this are what is important to us as a society. Is art essential?"

The filmmakers described the anxieties of grappling with weighing the importance of art against the risks of the virus as it spread. The anxiety is reflected in the film as the company stressed the importance of guidelines from the Centers for Disease Control and Prevention and the high coronavirus transmission rates in Utah to dancers and crew.

Choreographers were forced into a new creative lens, with only dancers from the same household being allowed to touch each other, otherwise remaining 6 feet apart. The tension building between movements of dances as the music crescendos, breaking for a moment as the dancers finally touch, signals an emotional release for the audience living in a touch-deprived reality.

"Really at the end of the project, it was about what the soul needs in order to survive. There's so much emphasis placed over the past year on what the body needs and how we're going to survive this physically, but these questions of what we need on a deeper level in order to live are the questions we were exploring," Whitten explained.

Ballet West corps artist Vinicius Lima, a Brazil native, struggled with Whitten's questions as separation from his family and the anticipatory grief of losing someone overshadowed his purpose.

"It was very difficult at first because I came here to America to dance and that's part of my identity and my purpose and when COVID happened, I got that taken away from me. My only purpose of being in America was taken away from me and my family was all over in another part of the world," Lima said. "So it puts everything into perspective, once the pandemic started, and it almost made me want to give up my dream because my family is the most important thing in my life."

But his family quickly dissuaded him of the notion that he was being selfish. Lima had been exposed to dance at a young age in Brazil through a project designed to help children get off the streets. By age 12, Lima said a teacher told him if he really wanted to pursue dance as a career, he would need to take ballet.

"Being a dancer kind of already started the breaking out of the box, because where I came from, nobody had become a professional dancer. Nobody was an artist for my family," said Lima, adding that his mother and grandmother supported him.

"But my dad, by not supporting me being an artist because it would affect my sexuality in his point of view, and that would make me be less valuable to society. If I ever became a homosexual, a queer person, made him not really appreciate what I was doing and not really value me being an artist," he said.

Lima describes how his father's words still continue to haunt him.

The series also portrays concerns as the presidential election loomed and civil unrest and racial issues were top of mind across the country.

"The backdrop of the election and the race issues that were prevalent last year and still are, were a huge part of what was going on and we didn't feel like ignoring those would make any sense at all. That's part of what drove the dances, and the dancers, and the choreographers, and everyone involved in the project," said Whitten.

But issues highlighted in the documentary persisted even after the series ended and Utah began to show signs of emerging from the pandemic.

In May, Ballet West noted in an Instagram post that two separate incidents occurred in Salt Lake City where Black dancers had been attacked with racial slurs.

Ballet West said in a statement that two dancers were "subjected to angry racial epithets screamed at them by individuals passing by in their vehicles. It is unimaginable that in 2021, our public gathering places are not safe from such hatred evidenced by the behavior of these racists.

"As an organization committed to maintaining a diverse and inclusive environment for all of its employees, Ballet West condemns the actions of these individuals in the strongest manner possible. We urge the community to stand united in condemning racism in all forms, including cowardly acts perpetuated by individuals from the safety of their vehicles. Lastly, we hope all of our neighbors and community leaders in our great city will elevate the conversation about race in an effort to educate about the destructive harm hate and hate speech inflicts on all human beings.#BlackLivesMatter."

Lima said the incidents put things into perspective for him, as a person of color.

"It's so unfortunate, it actually put everything into perspective for me when that happened," he said. "We can't choose the color of our skin, and the color of our skin shouldn't matter. It's so hard for people that don't know us, that judge us based on something that is just a look."

Lima added that he very often targeted with anti-gay slurs when he is out in public.

"I see how much work we still have to do for people to just respect things that we weren't even able to choose, but they see as a failure, even though they don't know us," Lima said.

But he remains hopeful.

"As people start seeing us in a place of honor, breaking the stereotypes this society puts against us, we will be able to be even more valued and judged by our greatness by the things that we can do."

The full series can be seen on Ballet West's website.