Firefighters from multiple agencies respond to a fire at an apartment complex that was under construction in Millcreek on Wednesday, June 16, 2021. (Kristin Murphy, Deseret News)

MILLCREEK — The investigation into what sparked a large fire at an apartment complex under construction is underway and surrounding business owners were assessing the damage Thursday afternoon.

As investigators look for the cause of this fire, they are looking for any video taken of the fire, especially before their crews arrived on scene.

On Wednesday, Chopper 5 captured the massive flames in the 1200 block of east Miller Avenue near Brickyard Plaza.

Chase Sorensen's family owns the Four Seasons strip mall, located near the construction site. "Just the amount of smoke that was here, I mean my eyes burned," Sorensen said.

He watched as 60 firefighters from various agencies battled the flames from outside. "This was a huge blaze. I'm just glad it didn't jump to anything else," Sorensen said.

His family's first concern was their 14 tenants. "We love all of our tenants," he said. "I'm really worried about the alterations lady. She is one of the nicest, nicest ladies."

The owner of Jung's Alterations was inside the shop when the fire started. Sorensen said she was having trouble breathing and was taken to the hospital by ambulance, but is expected to be OK. 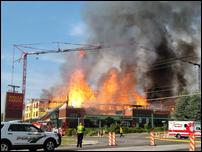 Millcreek Mayor Jeff Silvestrini says a three-alarm fire at an apartment complex under construction on Wednesday afternoon caused millions of dollars worth of damage.

He added customers turn to her when they want to look their best for those big life moments.

"She's fixed up stuff for us. We had custom little bathing suits made for family photo shoots, and we couldn't have done it without her," Sorensen said.

Unified Fire Authority said it is looking at millions of dollars in damage with a fire of this magnitude, and it is bringing in federal resources to assist.

Sorensen said their tenants are a tight-knit group, and they'll help each other heal.

"What's so hard is that COVID hit last year, and we worked with everyone to get everyone through and then this ends up happening, I mean, it's just a one-two punch," he said.

A couple of cranes damaged by the fire up overhead need to be removed.

Fire investigators said it's still was not safe to drive in and out of the area.