According to Myler, who used to live in Heber City, crossing the finish line with an Olympic trials qualifying time was a dream come true that she wasn't sure would happen.

In fact, the former BYU runner had nearly shelved the idea of running an OTQ time, because the Olympic trials for her event were supposed to be in the summer of 2020 when she was pregnant with her daughter. When the COVID-19 pandemic moved the Summer Olympic Games to 2021, it opened up a window for Myler to try for her OTQ goal.

"I've never been an Olympic hopeful, but ever since I graduated college I've wanted to make the Olympic trials in track," Myler said. "Fast forward four years in February 2020, I was hoping to make the Olympic trials standard while living in Australia. That attempt lasted about a lap and a half before I felt like a high school girl racing against the Australian Olympic team. The double-blue lines (on the pregnancy test) showed up two days later. I knew I'd still want to run competitively after the delivery, but I thought my chances of the Olympic trials were shot. Then the world shut down in a pandemic — including Tokyo — and my hopes to qualify were reignited."

Myler's hopes of running a qualifying time, however, still had to take a backseat while she was pregnant because her focus was on growing a healthy baby. And while many have wondered if her fast mile at nine months pregnant played into her OTQ goal, Myler said her official training began after giving birth. 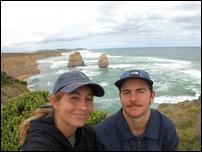 Heber City woman runs 5:25 mile at 9 months pregnant, has video to prove it

Makenna Myler of Heber City ran a 5:25 mile at nine months pregnant with her first child. Her husband, Mike Myler timed her and took the video that has gained over 3 million views on TikTok.

"The pregnant mile was pretty separate from my post-pregnancy running goal; I just wanted to prove my husband Mike wrong," she recalled. "Let me be clear: I was never training for any specific times during my pregnancy. It was all about effort and feel, and mostly getting in mileage and time on my feet. Every week or two, I'd throw in a workout, (tempo, interval, all-out mile) just because it was fun for me mentally. I was training to train again after giving birth."

The training, she said, began slowly about two weeks after giving birth and after receiving the go-ahead from her doctor. That training was a lot different than she was used to pre-motherhood, but what she said remained consistent before, during and after pregnancy was her ability to read her body's cues — and having a supportive family.

"Honestly, it can be pretty exhausting walking in from a 16-mile-long run and finding my daughter ready for milk right away," Myler said. "There have been quite a few times where I would have to call off a workout or back off the mileage because the broken sleep and demands of breastfeeding were getting to me. Knowing how to read my body's cues, and listening when it tells me (sometimes not so quietly) that it needs some TLC, is something in which I now consider myself an expert. Sometimes I feel overwhelmed, unable to manage anything outside of running and taking care of my baby girl, but my husband and family have been so supportive and helpful, there is no way I could have done this on my own."

When it came to race day, Myler said that it all just fell into place, and it was exactly what she had hoped for.

"I was pleasantly surprised when my legs felt light and springy for the majority of the race," Myler said. "It helped seeing my husband, Mike, with my daughter, Kenny Lou, yelling splits at me from the starting line."

She said the last couple of laps started to get uncomfortable, but she pushed through and crossed the finish line.

"I cried for half a second realizing all the work we put in to make this happen, and I gave thanks to God for helping me move forward when I felt so much like the underdog," she said. "I embraced my husband a little too hard considering our daughter was strapped to his chest. I took her out of her carrier and held her tight. Comforting her and at the same time letting it sink in that I was finally competing at a level I've dreamed of for years."

Myler said that she hopes her story will help people understand that everyone is more capable than they think.

"If it gets too hard, it's not always about pushing through the pain just for the sake of it," she said. "Sometimes it's also about finding new solutions, asking for help, and celebrating microscopic wins. ... You don't have to be an athlete to feel good about yourself, you just need to be involved and strive for real growth. That's where true fulfillment comes from."

As for the Olympic trials, they will be held June 18-27 at Hayward Field in Eugene, Oregon.