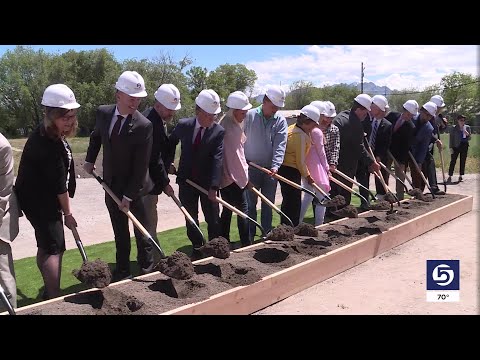 SALT LAKE CITY — From sirens and handcuffs, to compassionate, efficient care, Utah has taken a giant leap forward in how we treat mental health disorders.

Officials with the Huntsman Mental Health Institute broke ground on a new treatment center Wednesday that could become a model for the nation.

With the dog days of summer coming, Charlie Ellis, with his emotional support animal, Izzie, is looking forward to a sea of change in mental health treatment.

"You used to just be really hush-hush," said Ellis, who lives in Sandy. "You kept it under the table."

Ellis has depression and bipolar disorder and he isn't alone.

The land at 3300 South and 1000 West in Salt Lake City is fertile ground for change — a first-of-its-kind mental health center.

The center was made possible by the Huntsmans, Salt Lake County and 'Charlie's Law,' introduced by Utah Rep. Steve Eliason, R-Sandy.

"To have a facility that an individual can walk into without an appointment 24-7, 365 days a year, and receive quality mental health care treatment, particularly for those who are in a crisis," he said.

"This is a pivotal moment for mental health care in Utah" @MikeGoodMD Interim President, @UUtah , CEO, @UofUHealth at the groundbreaking for the new Mental Health Crisis Care Center. pic.twitter.com/VXJpghmsTC

The Crisis Care Center at the Huntsman Mental Health Institute of Hope will treat psychiatric emergencies with dignity.

"When somebody broke their arm, we signed their cast and celebrated it, but when something broke inside of us, we ignored it and tried to hide it," said Gov. Spencer Cox.

The new center could have made a difference for Ellis two years ago when he faced a mental health crisis.

"All of a sudden, about 10-12 police cars pulled up and lit up the parking lot," he said. "Backed me across the parking lot at gun and Taser point. They then proceeded to handcuff me."

They made him take an ambulance to the hospital, "then about a month later, arrived a bill in the mail for $4,500," he said.

When the center is completed, officials said they won't turn anyone away.

It will have room for walk-ins and people in a mental health emergency, helping patients avoid unnecessary jail or ER visits.

"It's going to cover everybody and you work with professionals," said Ellis. "And when you come out from your stay there, there's a plan in place for an ongoing program."

For Ellis, who's a baseball coach, it's a home run.

"It's OK to come forward and say, 'I'm having problems. I have depression. I have bipolar.' It's not something that you have to hide and hang your head about," he said. "You can have a great life. I have 10 grandchildren I get to go spend a great time with and do," Ellis said.

They're hoping to save lives and improve mental health.

The Crisis Care Center at the Huntsman Mental Health Institute Campus of Hope will open in late 2023.