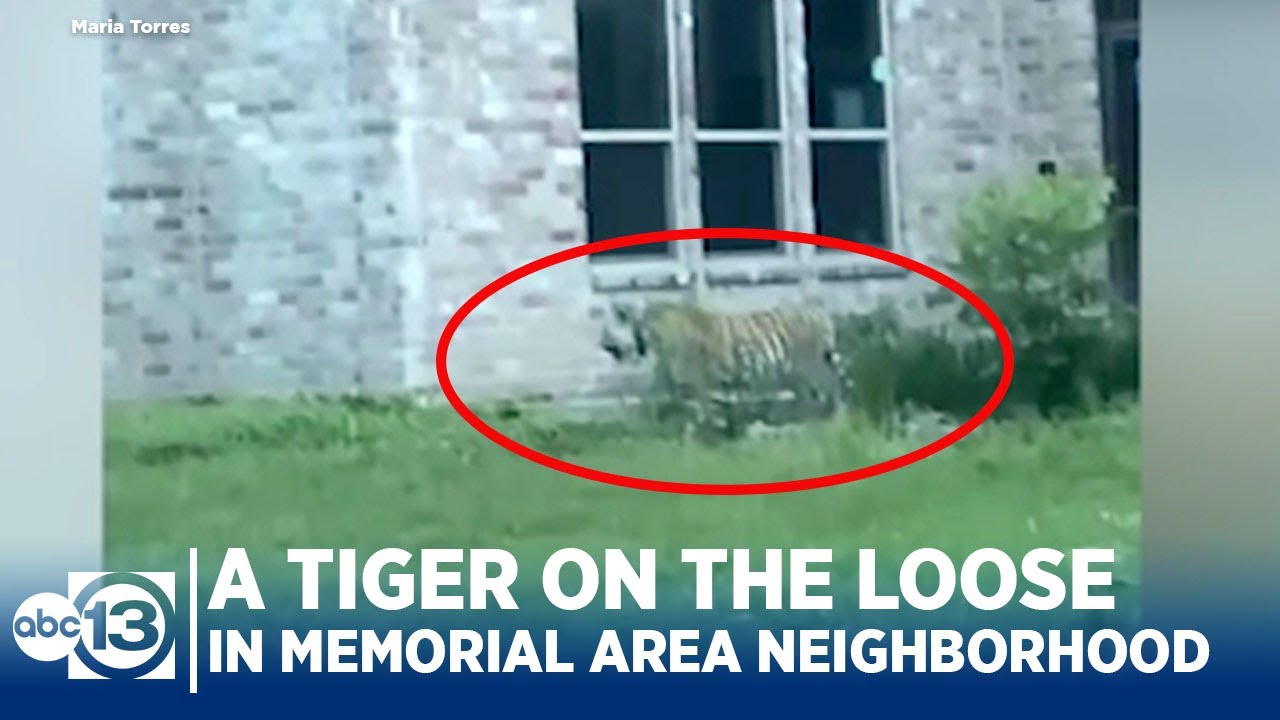 HOUSTON (CNN) — Houston authorities have captured a man who allegedly evaded police while housing a Bengal tiger in a yard, but the tiger remains on the lam.

"The whereabouts of the tiger are not yet known," Houston police tweeted Monday.

Victor Hugo Cuevas, 26, was out on bond for a prior murder charge in Fort Bend County on Sunday when neighbors spotted the tiger in a front yard, Houston Police Commander Ron Borza said in a news conference.

There were also reports that the suspect had monkeys, which are allowed in the city, Borza said. Owning a tiger is a violation of Houston law, but it is legal under Texas state law with certain restrictions.

Jose Ramos, 50, who lives next door, was eating on Sunday evening when he looked out the window and saw a tiger sitting in his front yard.

Ramos went outside to assess the situation and get a closer look at the tiger, his hands trembling as he snapped some photos and video. "It seemed a bit skittish," Ramos said. "But he was making full eye contact with me."

An off-duty deputy who lives nearby showed up after seeing some photos of the tiger Ramos had posted on a neighborhood email forum, Ramos said.

The deputy had his weapon trained on the tiger when Cuevas came out of a house, pleading with the deputy not to shoot the tiger, Ramos said. "He sounded very stressed out, very anguished by the mere fact that the deputy was aiming at the tiger and ready to shoot him."

Cell phone video taken by Maria Torres and provided to CNN affiliate KTRK shows the big cat lounging and walking in the grass outside a suburban home. Later, a man in a white shirt — who police said is Cuevas — straddled and grabbed the tiger and tried to move it away from others.

When Houston police arrived at the scene, Cuevas put the tiger in a white SUV and drove off, Borza said.

"There was a brief pursuit, and the man got away with the tiger," Borza said. Owning a tiger in Houston is a Class C misdemeanor, Borza said, punishable with a maximum $500 fine.

UPDATE: Victor Hugo Cuevas, 26, is charged with felony evading arrest for fleeing from HPD patrol officers this morning. Attached is a 2017 booking photo.

The tiger portion of the investigation is continuing.#hounewshttps://t.co/8tI5FeZvJHpic.twitter.com/XCo9rvXOHI

Police tweeted late Monday that Cuevas was in custody, but the tiger is still on the loose. Cuevas is charged with evading arrest/detention with a vehicle, according to Fort Bend County Jail records.

The tiger is a 9-month-old male named "India," according to Michael Elliott, the attorney for Cuevas.

The attorney told CNN that Cuevas is not the owner of the tiger. He also criticized Houston Police for arresting Cuevas at his home in Fort Bend County even though they already had an agreement with authorities to peacefully surrender.

"I understand that a lot of people are interested in what's going to happen with the tiger and what's going on, but in this case, HPD was in such a hurry to wrap it up (and) come find their guy, they just assumed," he told KTRK. "Because my client was the one who caught this tiger, who went out and got it, brought it back into safety, everyone is just assuming he's the owner of the tiger, that it's his tiger."

A Fort Bend County magistrate set a $50,000 bond Tuesday morning for Cuevas. He had been out on bond for a separate murder charge, and county prosecutors are now seeking to revoke his bond in that case. A hearing on that motion is set for Friday, according to Wesley Wittig, Fort Bend County Executive Assistant District Attorney.

Ramos had no idea a man charged with murder was living next door to him in this family friendly community — and with a tiger, no less. Police say Cuevas was not the owner of the home.

Cuevas was previously charged with murder for allegedly shooting and killing a man in 2017. Court documents allege he has been in multiple violations of his bond since he was first arrested for murder in 2017.

Separately, he was also out on bond from a different charge earlier this year in Austin County of evading arrest or detention in a vehicle, according to court records. He will likely stay in Fort Bend County until the hearing on Friday, according to Wittig.

Cuevas's attorney had asked for a $5,000 bond for the evading arrest charge.