SALT LAKE CITY — Activists and law enforcement officers in Utah and across the United States have begun preparations for the response to the verdict at the end of the trial of former Minneapolis police officer Derek Chauvin. Many hoped the impact of the trial will lead to long-term changes.

Metal barriers surrounded the Salt Lake Police Department, barriers that officers set up ahead of a protest on Friday, and that will remain up in preparation for protests in the wake of Chauvin's trial.

Closing arguments in Minneapolis wrapped up Monday afternoon and the jury began deliberating.

"We do not expect a positive outcome. We're definitely hoping for one, but either way, we're going to have a peaceful protest at Washington square," said Lex Scott, the founder and president of the Utah chapter of Black Lives Matter.

Scott said a "positive outcome" would be a murder conviction with a life sentence, and that anything short of that would be "injustice."

On Friday, she and others gathered outside Salt Lake City police headquarters to protest recent killings at the hands of police officers, and to stand in solidarity with the people of Minneapolis and family members of George Floyd.

"If there are to be a protest regardless of the verdict, the NAACP calls for nonviolence," she said.

Gov. Spencer Cox also called for a calm response, writing, "We urge Utahns to respond within the bounds guaranteed by the First Amendment. We will respect personal safety, life and property. Any threats against such will not be tolerated." 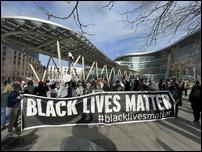 Protesters held a peaceful rally in downtown Salt Lake City to add their voices to the cry for justice across the country.

Beyond the immediate response to a verdict or mistrial, there were questions about what lasting impact, if any, the trial could have on policing.

"There's anticipation that with this trial and the end of this trial, change will be coming forward," said Chris Bertram, former Unified Police Department deputy chief and assistant professor of criminal justice at Salt Lake Community College.

Bertram said he believes the changes we have started seeing in law enforcement over the last year will continue, regardless of the outcome of the trial, but he said some "laws have to be changed" to get certain outcomes within police agencies.

One case does not define this movement. We are looking for a guilty verdict in this case, but we're also looking for systemic change across the nation.

Scott acknowledged that no matter the outcome — guilty, innocent or mistrial — the fight for justice and change will continue. For Scott, those changes look like an oversight committee for policing and other checks and balances to increase accountability and transparency within police departments.

"I need people to understand that one case does not define this movement. We are looking for a guilty verdict in this case, but we're also looking for systemic change across the nation," she said.