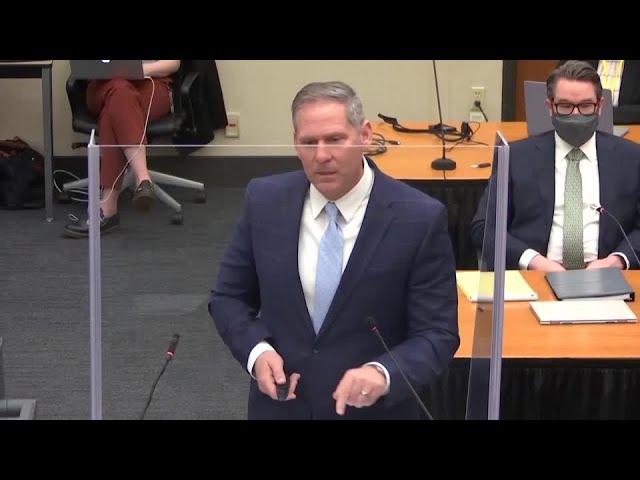 'What the defendant did to Floyd killed him,' says prosecutor | Reuters 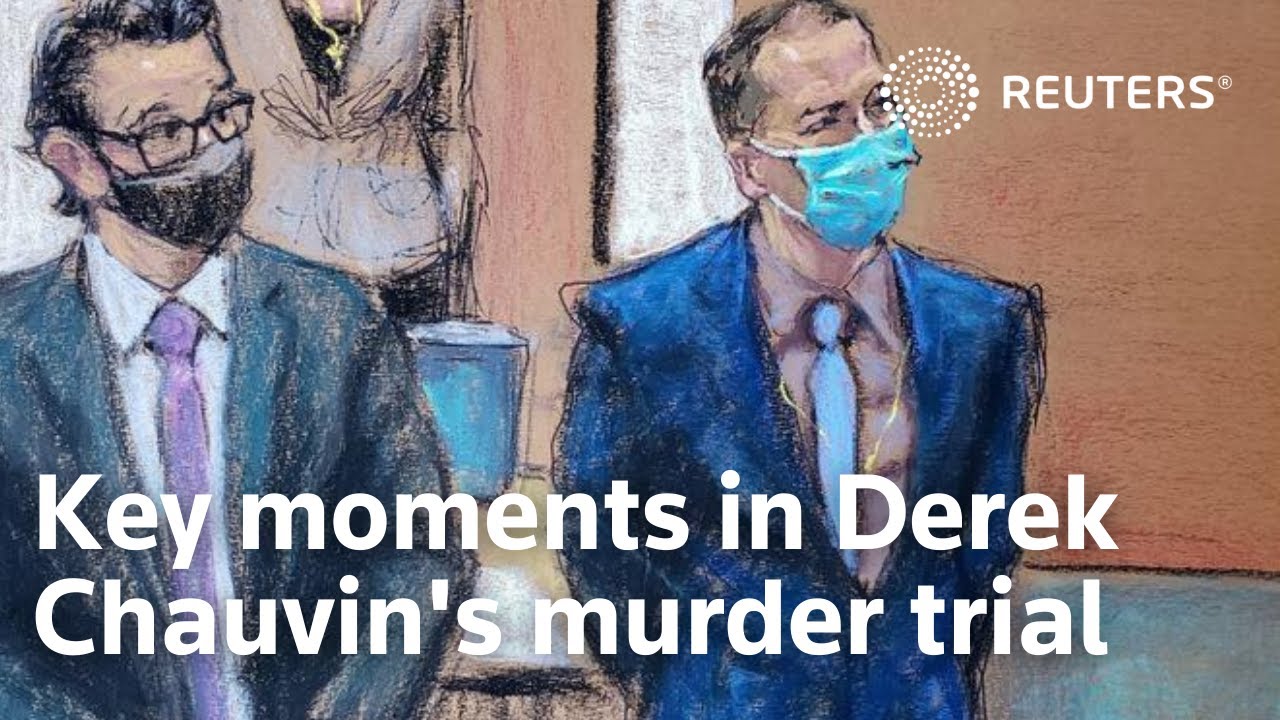 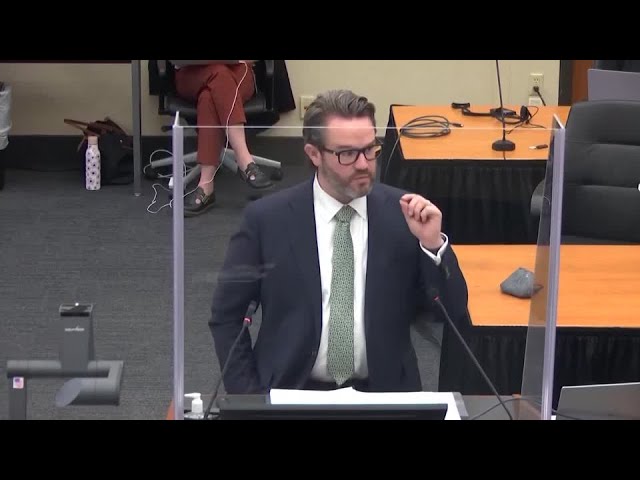 MINNEAPOLIS (Reuters) — Jurors in the murder trial of Derek Chauvin began deliberations on Monday after a prosecutor implored them to "believe your eyes" as he replayed video of the former Minneapolis police officer kneeling on a dying George Floyd's neck.

Chauvin's lead lawyer, Eric Nelson, countered in his own closing argument that Chauvin behaved as any "reasonable police officer" would, saying that he followed his training from 19 years on the force.

Over and over again, Steve Schleicher, a prosecutor with the Minnesota Attorney General's office, repeated a phrase: "Nine minutes and 29 seconds" — the length of time Chauvin was captured on video on May 25, 2020, with his knee on Floyd's neck.

Hennepin County District Judge Peter Cahill gave the jury final instructions before it left the courtroom at 4 p.m. to begin deliberations. Jurors adjourned after four hours and were sequestered in a hotel. Deliberations resume on Tuesday.

Although the verdict will be seen as a reckoning of the way the United States polices Black people, Schleicher emphasized in remarks that lasted nearly two hours that the jury was weighing the guilt of only one man, not a system.

"This wasn't policing; this was murder," Schleicher told jurors. He cited the motto of the Minneapolis Police Department, which fired Chauvin and three other officers after Floyd's arrest: "To protect with courage and to serve with compassion."

Chauvin, who is white, knelt on Floyd, a 46-year-old handcuffed Black man, outside the grocery store where Floyd had been accused of buying cigarettes with a fake $20 bill. Bystanders filmed and screamed at Chauvin to get off and check Floyd's pulse.

"He was trapped with the unyielding pavement beneath him, as unyielding as the men who held him down," Schleicher said, playing a clip of video he said showed Chauvin mocking Floyd's struggle to breathe.

The defense at the murder trial of former officer Derek Chauvin in the death of George Floyd rested its case Thursday without putting Chauvin on the stand, presenting a total of two days of testimony to the prosecution's two weeks.

'Unattractive' use of force

Nelson, his lawyer, said prosecutors were wrong to dismiss his theory that carbon monoxide poisoning from the nearby police car's exhaust and Floyd's use of the opioid fentanyl may have contributed to Floyd's death.

He repeated a single phrase scores of times, saying Chauvin behaved as a "reasonable police officer" would with a man as "large" as Floyd, who was struggling against being put in a police car when Chauvin arrived, responding to a call for backup.

Chauvin, dressed in a gray suit and blue shirt and tie, removed his face mask, part of the coronavirus pandemic's social-distancing requirements, and watched jurors listen to his lawyer, who spoke for nearly three hours.

In a final rebuttal, Jerry Blackwell, another prosecutor, scoffed at the carbon monoxide theory.

"What 'reasonable police officer,' when apprehending someone on the ground, subdues them and puts their face in front of a tailpipe of a car, and then thinks that's a defense?" he asked.

The extensive video of Floyd's death from multiple angles is the heart of the prosecution's case, replayed for hours on end to the jurors.

"You can believe your eyes," Blackwell said, echoing Schleicher's phrasing. "It was what you saw. It was homicide."

He said the video shows Chauvin using unreasonable, and therefore illegal, force in compressing Floyd's torso against the road, starving him of oxygen.

He said it was something that was obvious even to the youngest bystander who testified. "Even a 9-year-old little girl knows it: Get off of him," Blackwell said.

But Nelson used the same videos to try to prove the opposite point. The fact that Chauvin continued kneeling on Floyd even as he knew he was being filmed was evidence he believed he was responding to the scene in a reasonable way, Nelson said.

"In this case, the totality of the circumstances that were known to a reasonable police officer in the precise moment the force was used demonstrates that this was an authorized use of force, as unattractive as it may be," Nelson said.

National news networks carried live broadcasts of testimony after the first of 45 witnesses took the stand three weeks ago, although the coverage was sometimes interrupted by fresh episodes of police violence caught on camera.

The closest instance occurred a few miles from the courthouse in downtown Minneapolis when a white police officer fatally shot a Black motorist, Daunte Wright, on April 11 in a traffic stop in the nearby suburb of Brooklyn Center.

As angry protests swelled, Minneapolis and state officials have ramped up security precautions. The tower in which the courtroom sits is ringed by barbed wire and armed soldiers from the National Guard.

For the second-degree murder charge, 12 jurors will have to agree that prosecutors proved beyond a reasonable doubt that Chauvin committed a felony, in this case assault, that was a substantial cause in Floyd's death. They do not have to find that Chauvin intended to kill Floyd.

That crime carries a punishment of up to 40 years in prison, although sentencing guidelines call for a shorter sentence of up to 15 years for someone with no prior convictions.

Cahill on Monday harshly criticized U.S. Representative Maxine Waters' remarks on the case, saying she might have given the defense grounds for appeal in the event of a conviction.

Cahill said during the closing moments of Chauvin's trial that it was abhorrent of Waters, a Democrat from California, to tell protesters it would be unacceptable for the former officer to be acquitted of murdering George Floyd.

"I wish elected officials would stop talking about this case, especially in a manner that's disrespectful to the rule of law and to the judicial branch and our function," Cahill said after dismissing jurors from the courtroom.

Elected officials commenting on the case should show respect for the judicial branch, Cahill said. "Their failure to do so is abhorrent."

A spokesman for Waters did not immediately respond to a request for comment.

Cahill's remarks came after Chauvin's defense lawyer requested a mistrial, arguing that Waters' comments had tainted the proceeding. Cahill denied the request, but said the defense's concerns were legitimate.

"I'll give you that Congresswoman Waters may have given you something on appeal that may result on this whole trial being overturned," Cahill said.

Waters was in Brooklyn Center, Minnesota, over the weekend to show support for ongoing protests over the death of Daunte Wright, who was shot and killed on April 11 by a Brooklyn Center police officer during a traffic stop.

Waters told the protesters to "stay on the street" and "to get more confrontational" if Chauvin was found not guilty.