But the continuation of yearslong legal battles over Bears Ears and Grand Staircase-Escalante national monuments is not what Utah's leaders want to resort to, the governor told reporters during his monthly news conference at PBS Utah's studio in Salt Lake City. During the news conference, Cox talked extensively about Utah's COVID-19 response, but also fielded questions on other topics including Bears Ears.

"We've got this perpetual lawsuit and it's so dumb," Cox said. "And it doesn't help anybody. It doesn't make anything better. So no, I don't want that to happen. But if I'm being practical and realistic, and I probably shouldn't be, but that's what's likely to happen."

That's based on the past actions of former presidents and what's followed — a cycle that Cox and Utah's Congressional delegation hopes will end with Biden. The governor stressed an ongoing lawsuit is the "last thing I want," something he's said repeatedly.

But if collaboration — which he said he's still "hopeful for" based on conversations with federal officials that seem less "hostile" — doesn't happen, Cox said the question Utah's leaders would have to ask is, "What do we have left?"

"I fear (a lawsuit) is what we do have left. And so we don't want to go there. I'm not encouraging that. I'm not posturing as a way to say to the administration, 'Hey, if you don't do this, you know, we're going to sue you.' I'm just talking realistic because we've done this before," Cox said, pointing to lawsuits that have followed both former President Barack Obama's and former President Donald Trump's actions to designate and then shrink the monuments.

Congress is currently controlled by Democrats with a majority in the House and Vice President Kamala Harris' tie breaker vote in the Senate. If Biden does act "unilaterally," Cox said, "then I think the appetite for some sort of congressional resolution goes down dramatically."

At that point, "the best option is really to take the advice and recommendation" from U.S. Supreme Court Chief Justice John Roberts, who in a statement last month questioned how presidents have used the Antiquities Act by ignoring a provision that requires monuments be "limited to the smallest area compatible with the care and management of the objects to be protected." His comments suggested the Supreme Court might be open to hearing tests to the 1906 law.

If Biden uses his pen, Cox said Utah's leaders may have to resort to turning to the Supreme Court to "help us decide once and for all: Are we going to have the ability for presidents to lock up millions of acres? Or are we going to force them to actually follow the Antiquities Act and make those areas as small as possible to protect the actual antiquities?"

Cox stressed a legal battle is not a pattern Utah's leaders want to continue.

The Republican governor added it would be "really easy for me and my base to just throw bombs at the administration and ... pound the podium and say, 'We'll see you in court if you try to do this,' but that's not helpful."

Cox's comments came in response to reporters' questions about what Utah leaders would do if collaboration between the state and federal government fails and if Biden decides to expand Bears Ears by executive order. They also come about a week after Interior Secretary Deb Haaland toured the Bears Ears areas and met with state elected leaders as well as tribal leaders. 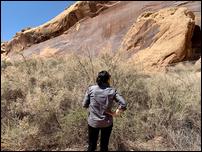 During that visit, Navajo Nation leaders called on Haaland, who is the country's first Native American to serve in a cabinet position, to expand Bears Ears from 1.35 million acres designated under former Obama but shrunk under Trump to an even bigger 1.9 million acres.

But Cox and Utah's Congressional delegation urged Haaland and Biden to not follow the same political path of their predecessors and use presidential powers under the Antiquities Act to designate the monuments with the stroke of a pen. Instead, they warned a "unilateral" decision like an executive order would jeopardize a legislative solution to prevent an ongoing game of political "ping pong" that they argued would offer a more long term solution for those sacred lands.

To do that, Utah's leaders want Congress to clarify the Antiquities Act and place more guardrails around what presidents would and would not have the power to do regarding national monuments.

While Utah's leaders expressed hope and optimism there was a willingness from Haaland to work collaboratively, Haaland made no promises during her visit. She only said her job is to listen, learn, and report back to Biden, who will ultimately make the decision.

Cox specifically credited Rep. John Curts, R-Utah, for meeting with Haaland and tribal leaders, and working "very hard to understand what it is they want."

"Yes, they want a bigger monument," Cox said. "But when you try to get to the heart of it, they also don't want people to come and overrun these areas, which leaves them in this difficult situation. They also want their tribal councils to be more involved with the management of the land. You know what? Those two things can't be done via executive order. Those can only be done through legislation."

Cox said there's an "opportunity" to give tribal leaders what they want, and to also "help people on the other side to be able to feel like they're not being left out, that they're not being economically disadvantaged for generations to come, in a way that benefits everyone."