SALT LAKE CITY — The University of Utah's former police chief and four officers, including an officer accused of mishandling explicit photos of murdered student Lauren McCluskey, have filed a claim against their former employer alleging they were treated unfairly in the wake of the student's death.

Former Chief Dale Brophy, who resigned in October 2019; Miguel Deras, the U. officer who reportedly showed his colleagues explicit pictures of McCluskey he obtained as he investigated her report that she was being harassed and blackmailed; and three other former department members — Rick McLenon, Mario Sellick and Aaron Nelson — are demanding $10 million from the university.

McLenon served as acting chief and resigned in June 2020.

In a notice of claim submitted to the Utah Attorney General's Office dated Feb. 3, the former members of the U.'s law enforcement office allege the university conspired against them in an attempt to save face amid public outcry that McCluskey's case was handled improperly, after removing several protections provided to department officers.

Their "good names, reputations and liberty interests have been adversely impacted," the lawyers allege. "Plaintiffs have suffered wrongful and unwarranted job loss, and/or have been rendered unemployable as a result of the stigma created and cultivated by Defendants."

The legal notice is the first step in a process that can lead to a lawsuit or settlement.

On Oct. 22, 2018, McCluskey, 21, was shot and killed on campus near her dorm by Melvin Shawn Rowland, 37. Rowland fatally shot himself hours later as police were closing in to make an arrest. McCluskey had ended a relationship with Rowland roughly two weeks prior, and later complained to university police after he began stalking and harassing her.

Brophy came under criticism in the months following the murder after reports surfaced that her complaints were not handled properly.

From Oct. 10 until her death, the 21-year-old communications student and track athlete from Pullman, Washington, called the campus police department more than 20 times reporting her concerns about Rowland, who had lied to McCluskey about his name, age and criminal history.

Among her complaints was that Rowland was using an explicit picture of McCluskey to extort her. A review conducted by the Utah Department of Public Safety later found that Deras showed the picture to others on his phone on at least four occasions, including once at the crime scene in the aftermath of McCluskey's murder.

Deras resigned from the department in September 2019 and took a job with Logan Police Department. He was fired after the report's findings were made public.

In the legal notice, lawyers allege the Department of Public Safety report was launched "in response to a public pressure campaign," citing a prior report conducted by the university that found the officers were not at fault.

Then, in anticipation of the report's findings, the claim states, the university revised its policies, removing several protections granted to its police department.

"The University did not seek or receive consent from any officer to change these policies, did change them to the detriment of officers who relied on the prior policies, and used the changes to damage the officers in question," the notice reads.

"At the same time the University, acting through its agents, conspired to keep secret certain circumstances surrounding and leading up to Lauren McCluskey's death," the notice continues. "Claimants believe the University concealed evidence, improperly classified records, and wrongfully denied GRAMA requests in order to effectuate this cover up." 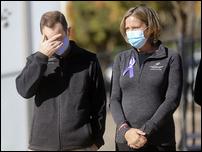 The parents of murdered University of Utah student Lauren McCluskey ended their federal lawsuit Tuesday against the school and others after apparently receiving payment from a settlement agreement reached last fall.

The university's apparent objective, the lawyers allege, "was to maintain its public image and to make it easier for the University to scapegoat or blame officers to appease public outcry."

The university then publicly released aspects of the Department of Public Safety's investigation, a report that the lawyers allege was not complete or accurate.

Following the release of the report, the university made public comments about the officers that were "false and misleading," the claim reads, then "permitted and invited a false narrative regarding certain of the Claimants to take root despite knowing that version of events was false and being aware that other evidence that would exonerate the claimants in question" in order to "focus public attention on the Claimants rather than its own institutional failings and wrongdoing."

The claim goes on to allege the officers were misled by the nature of the Department of Public Safety investigation, and that they were later denied access to records, witnesses and other material when they appealed their termination.

"The University had the objective and did effectuate, a 'kangaroo court' to hear the Claimants appeal in a manner that ensured the actual facts would not be developed and that termination was a certainty," the lawyers claim. "Many, if not all of these harms were directly prohibited under the prior personnel policy and are also directly contrary to established constitutional limits."