SALT LAKE CITY — From planned weekend rallies in school districts across the state to speaking out at local school board meetings, some parents are pushing back against Utah's ongoing public health order that requires K-12 students to wear masks at school until June 15.

The resistance comes as Utah's statewide mask mandates ends April 10, although businesses and other private property owners can still require them. The Utah Jazz organization announced earlier this week that masks will continue to be required at home games, which is also a league requirement.

Some parents say the transmission of COVID-19 in schools has been minimal and they question why students must continue to wear masks.

"I'm here to ask you to remove the masks. The data and the science is clear that there is no spread within the schools and there's no reason to be masking our children any longer. Masks are detrimental to our children's health," said parent Stewart Campbell, addressing the Davis School District Board of Education on Tuesday.

After "letting the government and the school district choose what is right for my children's health," Campbell said he reached out to their pediatrician and obtained medical exemptions for his children.

For the first time this school year, they attended school on Monday without masks.

"You should have seen their smiles when they got out at the school," he said.

Another parent, Brooke Stephens, asked the school board to allow a parent's signature to suffice when seeking a medical exemption.

"That's what I'm asking for, so that parents can decide because they know and love their children the most," Stephens said. Meanwhile, Stephens said she had also obtained medical exemptions for her children.

This order is effective through June 15. So we're going to be communicating with our principals that if a student isn't wearing a mask and they don't have an exemption then they aren't going to be able to remain in school.

Despite the concerns raised by parents, Rep. Paul Ray, R-Sunset, said Wednesday that "there is no talk of changing" the provisions of HB294. The legislation, sponsored by Ray, was passed by the Utah Legislature in March and ends the statewide mask mandate but maintains the K-12 face-covering requirement.

Ray said it would take a special session of the Legislature to alter the K-12 mandate and lawmakers aren't likely to meet again until June. The K-12 mask requirement was put in place to prevent school sports teams from refusing to play against opponents who weren't wearing masks, he said.

"We just didn't want to go there and that's why we kept that in play. I, personally, I had no problem with masks coming off at schools. But we wanted to try to keep the different schools from causing issues. It was easier to keep it in until the school year was over," Ray said.

Parents have had the option of seeking medical exemptions from masking requirements since the start of the school year. The forms require the signature of a health care provider. In Davis School District, 330 students among its 70,643 obtained exemptions with most seeking them the first couple months of the school year, according to district spokesman Christopher Williams.

Come Monday, it will be business as usual in the Davis District, Williams said, which means following the latest public health order that says mask requirements are in place at schools and on school buses.

"This order is effective through June 15. So we're going to be communicating with our principals that if a student isn't wearing a mask and they don't have an exemption then they aren't going to be able to remain in school," he said. 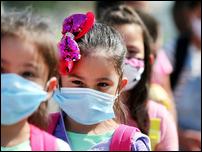 Lifting Utah's statewide mask mandate on April 10 will be "deeply problematic" for schools, a member of the Utah State Board of Education predicted Thursday.

Holt said he occasionally has to remind a student to pull up their mask but "I haven't had a single student that I can think of all year that's just been flat-out belligerent about it. If I see one without one and I ask them to put it on, they will."

The school has regularly tested student-athletes and has not had a single case of COVID-19 since Jan. 3, he said, adding that students are looking forward to end-of-year events.

Meanwhile, the Utah Parents United organization has launched the "See My Smile" campaign via social media and billboards urging the removal of mask requirements in schools.

The group is planning rallies across the state on Saturday and is encouraging parents to decide whether their children will attend school on Monday without masks.

According to Utah Department of Health guidance, local school boards or county councils don't have the legal authority to end mask requirements.

"Public health officials asked the Legislature to keep a mask requirement in place for the following reasons: No vaccine is currently authorized for anyone younger than 16. Not every adult in the school setting has been vaccinated. Children can get sick from COVID and have long-term effects. Children can get COVID, not feel sick, and transmit the illness to people at home who aren't vaccinated yet," the document states.