OGDEN — A man who shot and killed his ex-girlfriend in a grocery store parking lot in Ogden on Saturday before shooting himself following an hourslong standoff with police, has now died himself.

Ogden police announced Tuesday that Seth Levi Gibson, 34, was deceased, though information about when he died was not released.

Police believe Gibson confronted Mindee Lavell Elmore, 41, on Saturday in the parking lot of a Smith's grocery store at 1485 S. Harrison Blvd. where he shot and killed her.

After the shooting, Gibson drove to a house about four miles away in the 900 block of Maple Street where the Ogden Metro SWAT team tried for hour to negotiate with the armed man to surrender. The standoff ended when Gibson shot himself and he was taken to a local hospital in critical condition.

"This incident is a shock for our community and specifically the family members that it has impacted," police said in a prepared statement.

A GoFundMe campaign was started to help pay for Elmore's funeral expenses. The fundraising page describes Elmore, also known as Mindee Mastronardi Elmore, as "a beloved daughter, sister, aunt, and most importantly mother. ... Mindee was a very loving, known woman in Ogden."

Her family also issued a prepared statement on Monday, calling Elmore "a loving, caring, independent woman. She loved her child and family. She was a hard worker and always knew how to crack a joke. She was always laughing and smiling."

Elmore had been an employee at Andy's Club, a Greek restaurant in Ogden, for eight years. 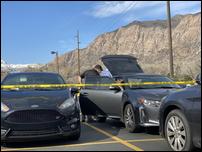 Police have identified a woman who they say was shot and killed by her ex-boyfriend in the parking lot of a busy Ogden grocery store Saturday.

"It is with the heaviest of hearts that we share the passing of one of our own. As a result of the horrific events that took place in Ogden Saturday afternoon, Mindee Mastronardi Elmore was tragically and unexpectedly taken from all who loved her on what was supposed to be a beautiful Easter weekend," the restaurant posted on its Facebook page.

"Easter was her favorite holiday. Her infectious laugh and magnetic smile easily made her a customer favorite. She was so much more than a co-worker, she was a loyal friend who will be forever missed but never forgotten."

Chelsea Griffis, who worked with Elmore at Andy's Club, said she had a larger-than-life personality. "She was just a great, wonderful, hard-working single mom."

Elmore and Gibson broke up about a year ago when the pandemic started and people started quarantining at home, according to Griffis. But while Elmore moved on and was dating someone else, social media posts appear to indicate that Gibson had not.

Elmore's current boyfriend posted a screenshot on his Facebook page that appears to show a message Gibson allegedly sent him before shooting himself. The message states: "You took Mindee from me. I took her from you."

Ogden police say the investigation into the case is ongoing and have declined to release any additional information.

"He wanted to prove a point," Griffis said of Gibson. "I'm sure that he knew that (Easter) was her favorite holiday, and I think he put that into the plan."

Griffis said she will miss her friend with the contagious laugh.

"She really brought a light and a fun energy," she said. "She had this laugh that, you know, the second you heard it, no matter what, no matter how you were feeling, you couldn't help but to start laughing."

Help for victims of domestic violence can also be found by calling 1-800-897-LINK (5465) or visiting udvc.org. The hotline is available 24 hours a day.