Arianne Brown: Raising teens and toddlers together is hard

SALT LAKE CITY — Teenagers and toddlers: I'm not sure I thought that combination through when doing my family planning.

One minute I'm cleaning up cottage cheese out of crevices in the floor (and the crevices between little chin rolls), and the next I am yelling at my 14-year-old for his unsuccessful cereal bowl toss into the sink that just so happens to be mere inches — INCHES — from the dishwasher that he doesn't use.

I often wonder why nobody warned me about the torment that would be my life as a mother of toddlers and teens.

When I finish a power struggle over whether the milk tastes better in the blue cup versus the yellow cup and then jump right into one over whether or not making it on time to class is an option, I feel lots of things inside that I can only describe as the color red.

Then there are the days when I spend my time telling my toddler boys to keep their hands to themselves, and later find out that a certain teenage boy (whom I did not raise) didn't seem to learn that lesson and went ahead and held hands with and kissed my teenage daughter!

Toddlers and teens aren't such a bad combination if I really think about it.

One minute I'm elbow-deep in the hard knocks of life, and the next I find myself walking in on my 13-year-old singing James Arthur songs while rocking my 2-year-old to sleep.

Perhaps having a daughter who spends her life on Snapchat and a son who spends his life mixing Play-Doh aren't as polar opposites as they sound. There are times when the teenager with the phone and a toddler with a cute face and playful demeanor come together in perfect harmony, as my oldest daughter recently captured for me to share and keep forever.

Maybe, my decision to have my youngest child when my oldest was 15 years old wasn't so careless after all.

I know for a fact that these are times that toddlers and teens will remember because I was a teenager with toddler-aged siblings. I learned how to change diapers, get unruly children to sleep, and that the power of distraction is not to be underestimated when trying to turn a toddler's frown upside down.

Watching my teenagers interact with their much younger siblings reminds me that these relationships are precious if they are treated that way. Before they know it, they will all be adults navigating life with one thing in common: the fact that they were all raised by parents who made a lot of mistakes. They will need each other more than they'll ever know to make sense of life, and the more sides to our family's story will hopefully paint a picture that says that we weren't all that bad.

Raising toddlers and teens is the worst of times, but it is also the best time I'll ever have as a mother. Isn't that the way life goes?

Have you raised toddlers and teens simultaneously? Tell us your best and worst stories in the comment section. And if you have advice… never mind, keep it to yourself. I prefer to learn the hard way. 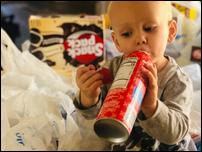 Please tell me I'm not the only parent with picky eaters

No matter the meal, there's always at least one child who refuses to eat. But even with a house full of picky eaters, I have learned some tricks to the trade. Mostly I have learned that I will never be able to please everyone no matter how hard I try.
×