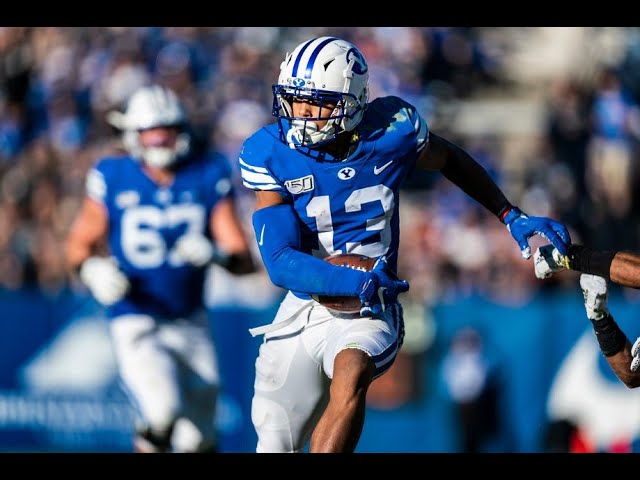 PROVO — BYU's pro day wasn't only a benefit for the Cougars' departing seniors and early NFL entrants like Zach Wilson and Brady Christensen.

The Cougars also had several former players test out during the annual "underwear Olympics," and one of them has already signed a free-agent contract after having his NFL debut delayed a year due to the COVID-19 pandemic.

BYU wide receiver Micah Simon has signed a free-agent contract with the Carolina Panthers, the team announced Tuesday morning. Terms of the deal, which was first reported by NFL Network's Tom Pelissero, were not disclosed. But the Athletic's Joe Person reports the contract is a three-year deal at the league's minimum salary.

Simon wrapped up his fifth year of college football in 2019, rising from all-around athlete to becoming one of the Cougars' more reliable receivers during his time in Provo. The 6-foot-1, 195-pound pass-catcher finished his career with 90 receptions for 1,109 yards and five touchdowns, plus two rushing scores.

Make the most out of every opportunity 🙏 pic.twitter.com/ereDVkTWNq

The former quarterback at Bishop Dunne High School in Dallas, Texas, is perhaps best remembered for his game-saving catch Sept. 7 of his senior season against Tennessee that helped key the Cougars' rally for a 29-26 road win over the Vols.

But the speedy wide out will be known among the Panthers for his speed. Simon clocked a 4.34 40-yard dash at the Cougars' pro day Friday — the second-fastest on the team, trailing only defensive back Chris Wilcox's 4.31.

Even Wilcox, who ran the 40 twice and posted times just under 4.40 both times, said Simon was the driving factor behind his flash of speed. So, too, was being able to reconnect with the half-dozen other former players who made the return trip to Provo to finally seal up their careers with a pro day — even if it was a year later.

"It was great, especially how they brought back the older guys who didn't get to have this chance," Wilcox said. "I thought that was cool. It was an overall great experience."

Micah Simon checking in with a 4.34 ⚡️ pic.twitter.com/8AMok6ru3u