Among the bills Cox signed at his rural office in Cedar City was SB243, creating a $75 million "infrastructure bank," a new funding mechanism for low-interest loans for Utah Inland Port Authority projects. Legislative leaders said they intend for that bank to help provide loans for rural "satellite" project areas for the port.

Cox signed the bill despite a letter port opponents delivered to his office last week calling on him to veto the bill. On Wednesday, dozens of activists spoke at the port authority board's public meeting, continuing their calls to stop the development of the port in its tracks, citing concerns with increased pollution, traffic and other environmental impacts on the Wasatch Front.

State leaders and port proponents argue Utah needs a port authority to maximize the state's foothold in the global economy and to better coordinate imports and exports, especially as transportation logistics become increasingly important with increased demand with the rise of companies like Amazon. They also argue a Utah Inland Port with satellite ports in rural areas will relieve traffic along the Wasatch Front and allow trucks to pass through the state without having to drive into the Salt Lake Valley.

Rural leaders have welcomed the port authority as a way to improve local economies and bring more jobs to the areas.

Jack Hedge, the port authority's executive director, has also said the agency is committed to a sustainable future and last week discussed a project with Utah State University to demonstrate the feasibility of electrifying cargo-handling equipment. Hedge raised the possibility of marketing the port authority as a "test bed" to companies wanting to try new technology like electric trucks in the real world.

Cox in his monthly PBS Utah news conference Thursday said rural port areas will "take pressure off of the main inland port in Salt Lake and move some of those projects out of Salt Lake, which I think would be a benefit to those who oppose the inland port."

"The inland port is already happening," Cox said. "What this bank allows us to do now is to put the infrastructure in place to make sure that it's successful. I will also say that I've had several conversations with the (port board, Hedge) and others. And what I'm seeing around the environmental piece of what they're doing out there is truly remarkable."

Deeda Seed, a campaigner with the Center for Biological Diversity and a lead organizer with the Stop the Polluting Port Coalition, called Cox's signing of the bill "disappointing."

"But not unexpected given the governor's support for a number of polluting and environmentally harmful projects in addition to the inland port and satellite ports — including the Uinta Basin Railway, the Lake Powell pipeline and Bear River diversions (which would harm the Great Salt Lake)," Seed said.

However, Seed was also hopeful for productive conversations with Cox.

"We hope sometime to have a conversation with him about our concerns, as he seems to be someone who is open to conversation," she said. 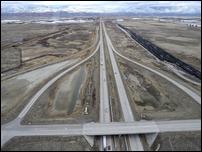 With just one week of the state Legislature's 2021 session to go, lawmakers dropped a big bill that could have major implications for the Utah Inland Port Authority.

Cox signed several other bills focused on rural areas, including HB356 to change tax credit programs to help businesses in rural Utah, and SB194 creating the Utah Main Street Program within the Governor's Office of Economic Development to provide resources for revitalization of downtown or commercial district areas in cities across Utah.

Ahead of newly confirmed Interior Secretary Deb Haaland's plans to visit Utah next month, Cox signed HCR12, a concurrent resolution encouraging President Joe Biden and his administration to "work cooperatively with the state's congressional delegation, the state's legislative and executive branches, local communities and tribes" on any actions regarding national monuments.

The Biden administration has extended the 60-day timeline for a review of Bears Ears and Grand Staircase-Escalante national monuments, the boundaries of which have become a political football on the federal level. Biden issued an executive order calling for a review of the monuments in January after former President Donald Trump drastically reduced their sizes during his first year in office.

Last week Cox called the way presidents have used the Antiquities Act in recent years to designate sweeping swaths of land national monuments "un-American" and "unconstitutional." But he expressed hope a longer-term solution could be reached to prevent that "ping-ponging" of Bears Ears' and Grand Staircase-Escalante's boundaries into the future.

"There's been an interest in really finding a permanent solution," Cox said.

Cox also signed HB341, creating an advisory committee to study the building of a visitors center at Bears Ears in collaboration with tribes to help prevent negative impacts of increased crowds visiting the area.

Cox has until Thursday to sign or veto remaining bills. So far he's signed 446 of the 502 passed by the Legislature. Others signed Monday include: