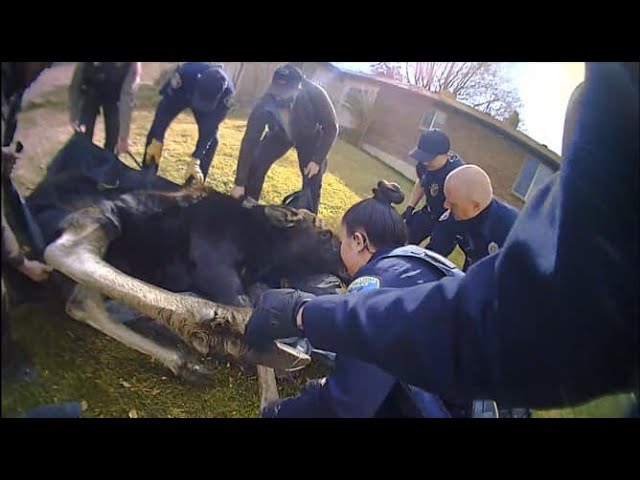 RAW: Moose captured in Centerville, relocated back to wilderness

CENTERVILLE — A 2-year-old bull moose weighing over 1,000 pounds has a new home in Utah's wilderness after the animal found its way into the backyard of a home in Davis County over the weekend.

Utah Division of Resources conservation officers and Centerville police were called to respond to a moose roaming the streets of Centerville Sunday morning.

Brooklyn Evans, a DWR conservation officer, said the animal came down from the foothills and into the eastern portion of the city. It had made it to a busy intersection by Parrish Lane, which led to the calls of a moose on the loose.

The animal made it toward the backyard of a home by the time a state wildlife biologist was able to shoot a tranquilizer dart into the side of the moose.

"He was actually walking right towards the trailer, so it was really perfect for us," Evans said. "He eventually just laid down and was really tired, so it was a perfect opportunity for us to get over there and take a tarp and slide him onto the tarp."

Both agencies posted videos and images of the effort to extract the moose from the yard of a home in the area before the animal was carried off. Wildlife officials then transported the moose to his new home at East Canyon in Morgan County and released it on public land there.

Our Officers are called upon to assist on all sorts of situations from one day to the next...today it was a "moose on...

Video of the animal release provided by state wildlife officials shows the moose casually walking toward the canyon wilderness, pausing a few times to look back at the trailer, in his first moments back in the wild.

"Now he's up there and probably living the dream in a new area," Evans said.

Moose, and other wildlife, encounters in Utah's residential areas aren't extremely rare. Wildlife officials said Sunday's incident is a good reminder of how to handle situations where wild animals are found where they don't belong.

Evans applauded how Centerville residents handled the situation by alerting authorities right away. She explained that it allowed experts enough time to assess the situation and handle it in a way that didn't injure people or the moose.

"The best thing to do is to not approach the animal," Evans said. "As exciting as it is and everyone wants to take pictures and everything, especially with moose — they are so territorial and really just unpredictable.

"It's not worth it to risk your safety just for a picture, so we just kind of ask people to give them their space, call your local law enforcement and make them aware of it," she added. "That way they can reach us or just reach out directly to us, so we can ensure that we can get out there and properly assess the situation."

The Utah Division of Wildlife Resources partners with Utah's Hogle Zoo and Utah State University Extension for the Wild Aware program on how people should handle all sorts of wildlife, especially while outdoors.

When approached by or approaching a moose, the experts say: