Have You Seen This? Russian sport combining wrestling and basketball is basically church ball

RUSSIA — What do videotape recorders, solar cells, powdered milk, and kettlebells have in common? They were all invented in Russia.

One of the country's lesser-known contributions to the world is the sport of rugball.

Never heard of rugball? Join the club. It's an obscure sport that received worldwide attention when a video featuring game action went viral earlier this month.

While most of the world watched this footage in confusion, folks around here just nodded their heads understandingly. After all, Utah men have been violently wrestling on basketball courts for generations as part of the grand tradition of church ball. The only real difference is that rugball players wear singlets instead of jerseys that have already been drenched in a stranger's sweat.

According to the Russian Regball Federation's website, the sport was invented 30 years ago by Russian wrestlers. It was officially recognized as a sport in 2003 and has since spread to countries such as Holland, France, Czech Republic, Belarus, Ukraine and Estonia.

"Rules are very simple: everything is allowed, except for foot pegs, shocks in the back and a clear provocation to the collision," explains the federation. "No basketball dribbling and free throws. Violent power struggle in combination with the dynamics makes REBOL very entertaining and exciting game."

Apparently, this sport evolved from wrestlers preparing for matches. And the Russian Regball Federation now proclaims that it's "scientifically proven that REBOL is the most appropriate means of preparation of fighters."

There must be something to it because even top-tier athletes like Donovan Mitchell are taking notice of the sport. So if you're hoping to improve your results in wrestling matches, or just want to relive your church ball glory days, it might be time to join a rugball league. 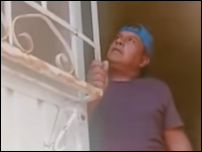 If this isn't the greatest cover song of all time, then I guess I just don't know music.
×