The Senate passed President Joe Biden's $1.9 trillion COVID-19 relief bill by a 50-49 party-line vote after a marathon overnight voting session. The bill includes $1,400 checks for many Americans and directs billions of dollars to schools, state and local governments, and businesses. It will now go back to the House for a separate vote before Biden signs it into law.

During debate on the bill, Romney wanted assurances that money wasn't being wasted. He offered an amendment, which failed to be adopted, that assistance go to states with a proven need.

"There was an assumption states had massive revenue losses associated with the COVID experience, but the data that has come out since then shows many states did not," Romney told senators.

Twenty-one states, including Florida, Oklahoma, Utah and California, he said, are seeing a rise in revenue. 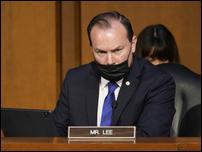 As the Senate prepares to take up President Joe Biden's massive COVID-19 relief package, Sen. Mike Lee is among a group of Republicans calling it a Democratic wish list that would hurt the economy.

"My state of Utah doesn't need more money," Romney said, adding that this economic stimulus package provides California $26 billion at the state level, and $41 billion with what cities across the Golden State will get.

"This is on top of their already surplus year," he said. "We're going to be asking the American people to allow us to borrow money from China and others, pass that on to our kids and grandkids, so that we can send money to states like California and mine that don't need the money. That doesn't make any sense at all."

Lee, wasn't happy about the package for other reasons.

"For more than a year now, Congress has fought back against the COVID pandemic the same way the American people have: together," said Lee. He said five relief bills were passed with bipartisan support, but Saturday's "partisan grab bag of special interest handouts" was done differently.

"This bloated, wasteful bill was not written for patients or businesses or workers suffering from COVID; it was written for the Democratic Party," he said. "It's a shame and a sham."

"Throughout this difficult time, the American people have bravely held up their end. Today congressional Democrats dropped theirs," Lee added.